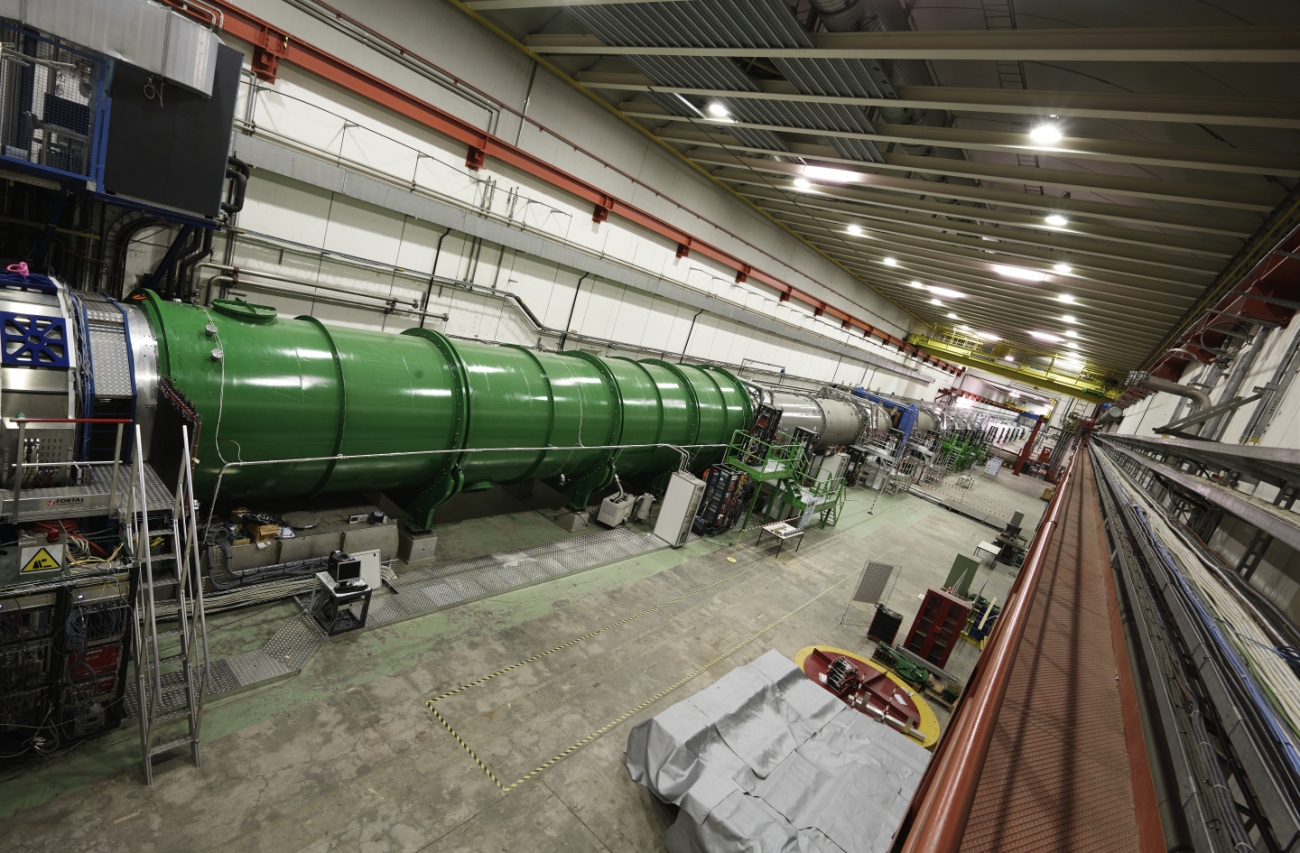 The CERN NA62 collaboration presented at the ICHEP 2020 conference the first significant experimental evidence for the ultra-rare decay of the charged kaon into a charged pion and two neutrinos (K+ -> π+νν). The decay process is very sensitive to deviations from theoretical predictions. Its study is interesting for physicists looking for evidence for new physics, beyond the Standard Model of particle physics developed in the 1970s. The Standard Model describes the fundamental forces and building blocks of the universe; it is a highly successful theory, but there are several mysteries of the universe that the Standard Model does not explain, such as the nature of dark matter and the origins of the matter–antimatter imbalance in the universe. Physicists have been searching for extensions to the Standard Model, and measurements of ultra-rare processes provide an exciting avenue for exploring these possibilities.

Building on a long tradition of research into matter-antimatter asymmetry carried out in experiments NA31 and NA48, NA62 is examining the decay of kaons, and one type in particular – where a kaon decays into a pion and two neutrinos. The Standard Model gives a precise prediction of the frequency of this decay. It’s a very rare occurrence, but looking closely at these rare processes is essential for exploring physics beyond the Standard Model. The technique that NA62 is using – observing decay in flight – has never been done before. “The prize is the journey. Proposing and successfully implementing such an original design has been very rewarding” says Augusto Ceccucci, NA62 CERN Team Leader and Leader of the EP-SME group.

The NA62 experiment has been designed and constructed specifically for measurement of these ultra-rare kaon decays, from kaons produced by a unique high-intensity proton beam provided by the CERN accelerator complex. The kaons are created by colliding high-energy protons from CERN’s Super Proton Synchrotron (SPS) into a stationary beryllium target. This creates a beam of secondary particles which contains and propagates almost one billion particles per second, about 6% of which are kaons. The main aim of NA62 is to measure precisely how the charged kaon particle decays into a pion and a neutrino–antineutrino pair.  “The experiment would have been impossible without the outstanding contributions of the EP Department”, says Augusto Ceccucci.

The probability for this process to happen, i.e. the branching ratio, for the ultra-rare K+ -> π+νν decay is very small and predicted within Standard Model of particle physics to a high precision: (8.4±1.0)×10-11. The smallness of the Br is due to having the highest quark coupling (“CKM”) suppression and to being a so-called Favour Changing Neutral Current process that is in fact forbidden at the lowest level (“tree” level) in the Standard Model. This means that processes like that can only proceed via high-order contributions, or “loops”, where yet-undiscovered new particles may be exchanged. This leads to exceptional sensitivity to the possible phenomena beyond the Standard Model description. Still, the process is well predicted theoretically since the part of the calculation that is the hardest to derive can instead be inferred from measured quantities. Therefore, this kaon decay process is called the ‘golden channel’, i.e. one of the most interesting observables at the precision frontier of particle physics, because of the combination of being both ultra-rare and excellently predicted in the Standard Model. 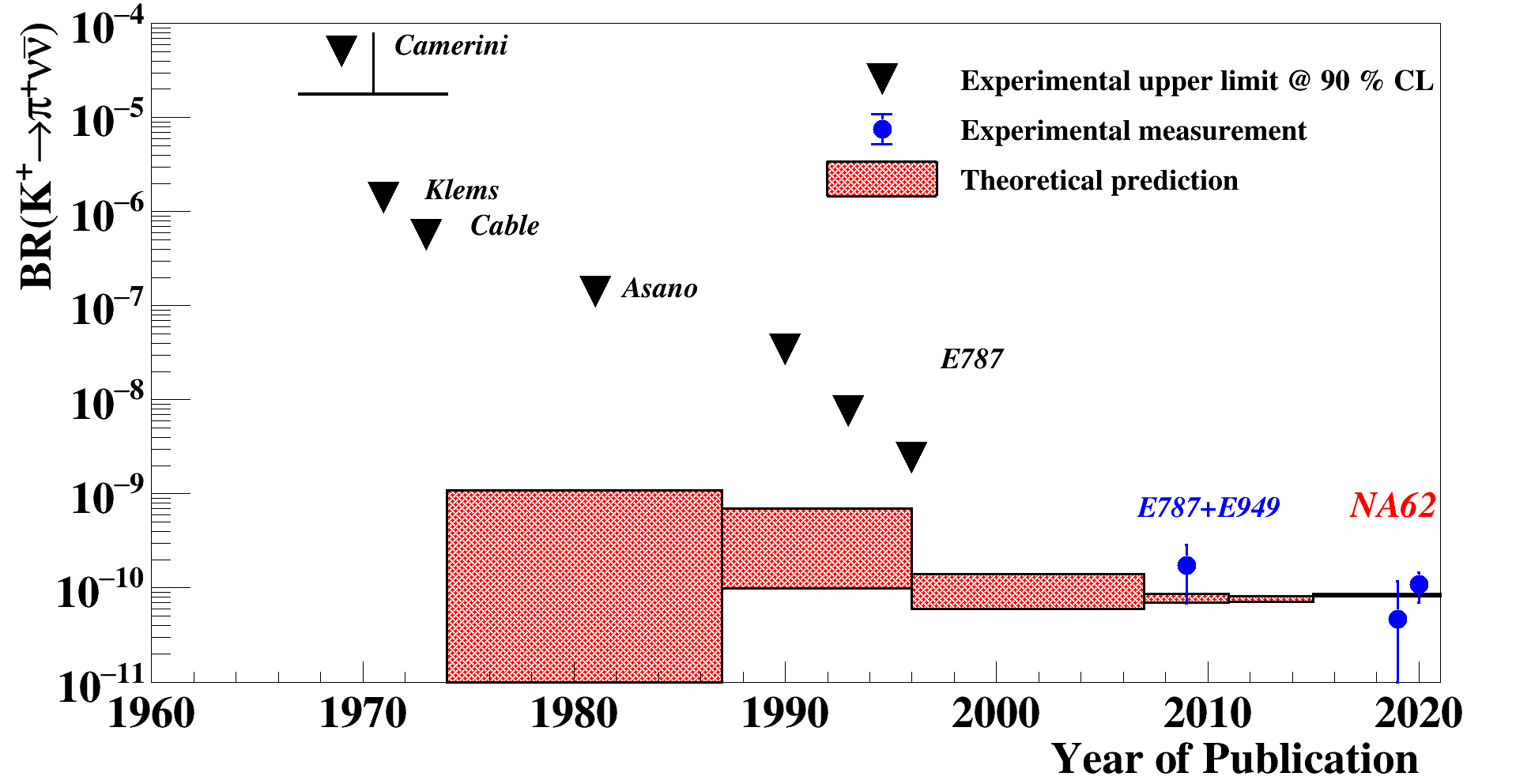 Historical development of the theoretical predictions (red areas) and experimental limits (black triangles). There are 3 measurements in blue: the first is from an experiment in US. The following two are from NA62 with earlier data, and this measurement. The increased precision of the current measurement can be clearly seen. (Credit: the NA62 Collaboration)

The experimental study is however extremely challenging due to the tiny rate, a neutrino pair in the final state which are undetectable, and huge potential background processes. Due to its characteristics, the NA62 experiment has excellent sensitivity to a variety of rare kaon decays and exotic processes. "This very elusive decay has been long chased for decades. It poses many challenges from the experimental point of view" says Karim Massri, NA62 Physics Coordinator and EP staff.

The data used in the research was taken between 2016–2018 at CERN’s Prevessin, and the research involves over 200 scientists from 31 institutions. The new result comes from a detailed analysis of the complete NA62 data set collected so far, corresponding to exposure of 6×1012 kaon decays. Because the process being measured is so rare, the team had to be particularly careful not to do anything that might bias the result. For that reason, the experiment was carried out as a ‘blind analysis’, where physicists initially only look at the background to check that their understanding of the various sources is correct. Besides, the analysers had to suppress a huge amount of unwanted data, by about one thousand billion times, and do this without losing the tiny signal that is looked for. Only once the analysers are satisfied with that, they look at the region of the data where the signal is expected to be.

Following a blind analysis, 17 K+ -> π+νν candidates are observed in the main dataset collected in 2018, revealing a significant excess over the expected background of only 5.3 events. "This is an important milestone for flavour physics and contributing to it as part of the CERN team is a dream come true for me" says Radoslav Marchevski, one of the lead analysers and EP research fellow. 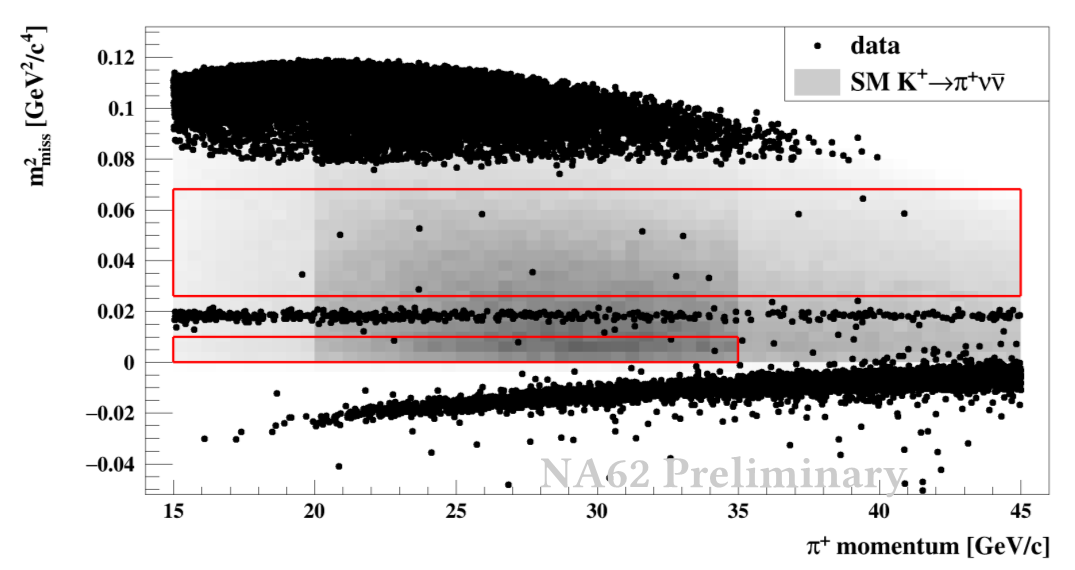 The 17 events from 2018 data set are visible inside the red boxes (the red boxes have been kept blind during the analysis, and their content revealed only as the last step). The other black dots outside the red boxes are mainly due to background, i.e. from other processes. (Credit: the NA62 Collaboration)

This excess leads to the first evidence for this process (with a statistical significance above the “three sigma” level). The decay rate, using all the data from 2016-2018, is 11×10-11 with about 35% precision, and gives the most precise measurement to date of this process. The result is consistent with the Standard Model expectation, and excludes “large” contributions to the decay from beyond-the-standard-model physics. Still, it leaves room for new physics effects. In fact, the majority of new physics scenarios foreseen deviations that are smaller than the current precision. It remains very interesting to improve the precision of the measurement to pin down a large variety of new physics models. More data are needed to improve the precision and reach a definitive conclusion on the presence or not of new physics.

A new period of data taking will start after LS2 and will allow the NA62 collaboration to put a more definite answer on the question of new physics.  The NA62 collaboration is preparing to collect an even larger dataset in 2021–24, when the CERN SPS will restart operation, taking data at a higher beam intensity with an improved beam line and detector setup. A fourth station of the beam spectrometer, an enlarged photon veto system and a new anticounter will be added to suppress the background from kaon decays and from events occurring early along the beam line. On the software and analysis side, the experiment plans to further limit the effect of events pile-up in the detector.

The next target is a “five sigma” observation of the K+ -> π+νν decay, followed by a measurement of the decay rate to a 10% precision, thereby providing a powerful independent test the Standard Model of particle physics. "This result opens the avenue towards precise measurements of FCNCs in the kaon sector" says Radoslav Marchevski.

The instruments and techniques developed in the NA62 experiment could lead to the next generation of rare kaon decays experiments. "This great achievement is the first of a long series. We are at the dawn of a new era for kaon physics", says Karim Massri. For the longer term future, ideas for a high-intensity kaon beam programme are starting to take shape, with prospects to measure the K+→π+νν decay to a few % precision, to address the analogous decay of the neutral kaon,  KL→π0νν, and to reach extreme sensitivities to a large variety of rare kaon decays which are complimentary to investigations in the beauty quark sector.