A new VELO for the LHCb experiment 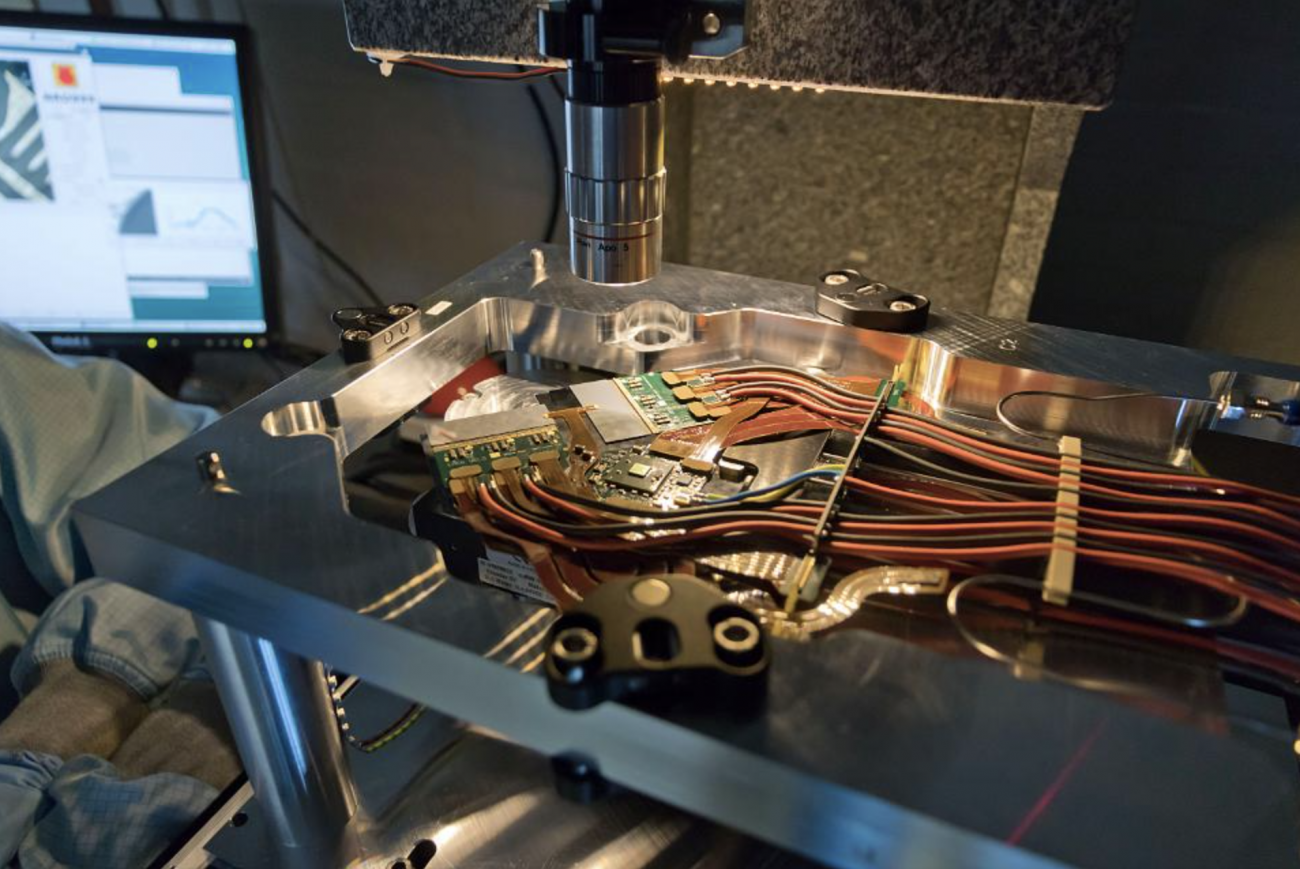 The VELO is stacking up milestones as it races to complete installation before the Run 3 startup. The previous VErtex LOcator (VELO) is being completely replaced during Long Shutdown 2 as part of a major upgrade programme to allow the experiment to operate at an instantaneous luminosity of L = 2 × 1033 cm−2s−1, five times higher than previous runs [1]. Fifty two pixel modules equipped with lightweight silicon microchannel coolers will be arranged along the beamline in a secondary vacuum, separated from the LHC beams only by a a 150 µm thin foil. The VELO is mobile and during injection the halves will separate. They will then close around the colliding beams which will thread themselves through an aperture of just 3.5 mm over the full VELO length of more than 1 m. The first pixel measurements will be just 5.1 mm distant from the beams and the high intensity requires each ASIC to be capable of outputting zero suppressed data at 20 Gb/s. As the project nears completion the teams are starting to celebrate the various achievements and the excitement is mounting as all the elements come together.

The idea of cooling particle detectors with bi-phase CO2 was pioneered by LHCb for Run 1, while the concept of cooling by circulating coolant in microscopic channels embedded within a silicon wafer, diced to the desired final shape, is an emergent technology, first implemented at CERN by the NA62 experiment. For the LHCb VELO Upgrade the two ideas have been combined, to provide the required performance in the vacuum environment where the VELO will operate. The hybrid pixel sensors, which will be highly irradiated, will be kept at temperatures of less than - 20◦C by bi-phase CO2 circulating in channels embedded within a 500 µm thick silicon wafer. The wafer production relies on silicon complex silicon photolithography, etching, bonding and dicing techniques along with a strict quality control due to the installation in the LHC secondary vacuum. After the cooling plates are produced it is not the end of the story as the connectors delivering the CO2 have to be attached with a complex fluxless soldering procedure. 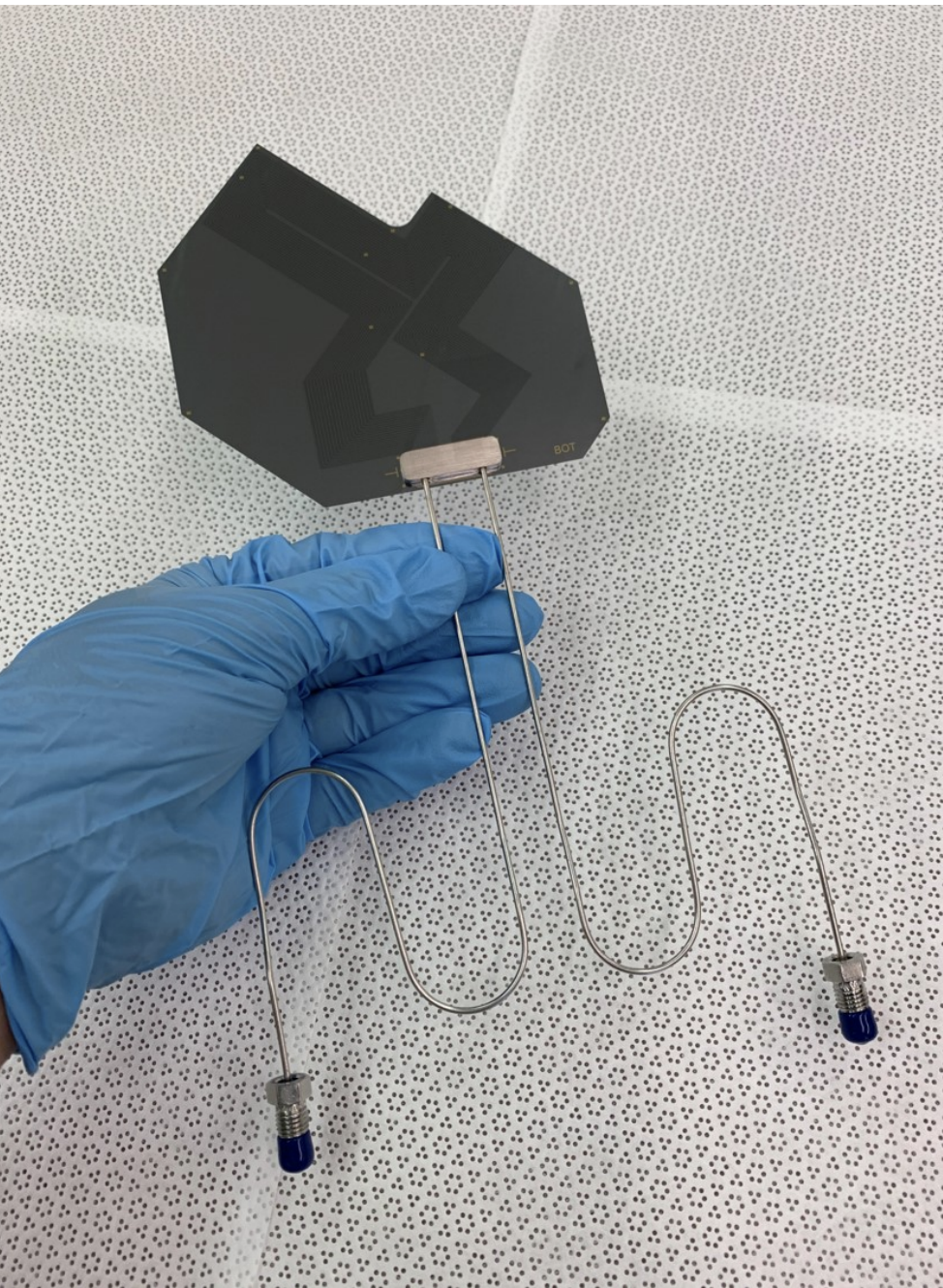 This has been developed in collaboration with numerous CERN services which have provided expertise in metallisation, surface treatment, metrology, X-ray tomography, and other techniques which have been crucial for the successful microchannel production. The team working on the microchannel assembly celebrated in September the completion of the 81st and final cooling assembly, a culmination of seven years of R&D.

The precise and lightweight VELO modules are built to position the sensors at the closest possible distance to the beamline while providing mechanical support, cooling, high voltage, ultra high speed data links and all electrical services in such a way that adds minimum material in the LHCb acceptance. The assembly of one of the double sided VELO modules requires precision glueing of the pixel sensors and hybrids onto the delicate microchannel surface followed by wire bonding, cable attachment and metrology. This is followed by a rigorous quality assurance and thermal cycling programme designed to prepare modules which can withstand a decade of low temperature operation in one of the most hostile environments at the LHC, and will tolerate a bias voltage of 1000V at the end of lifetime.

Figure 2. On the left, module design concept. On the right, photograph of one of the finished VELO modules (Credits: LHCb Collaboration).

The modules must be tested in vacuum, corresponding to their operational condition, while being cooled with bi-phase CO2, together with an infrastructure capable of testing data rates of up to 20 Gb/s per ASIC, while sensitive to error rates at levels of below 10−12, in order to establish that the final detector will be capable of 40 MHz triggerless readout. Running through all the processes involved in the assembly of one module takes about a week, and this painstaking work has been carried out by two teams working at the University of Manchester, UK, and Nikhef, NL. Together, at the start of November, they reached the milestone of 52 fully assembled modules. After a brief pause to celebrate the teams are continuing to construct spare modules to act as spares.

Once completed, the VELO modules are transported to the University of Liverpool. Here, the VELO teams have been preparing to assemble the VELO halves. The complex supporting structure for the VELO modules hosts all services and cooling. The assembled detector half will be completely pre-commissioned at Liverpool, ready to be sent to CERN and encapsulated inside the VELO vacuum tank. The tank contains secondary vacuum enclosures and host a cooling manifold connected to a network of capillaries which distribute the CO2 to the modules. The subcooled liquid evaporates and cools the modules, a complex mesh of high speed cables to transmit the high speed signals and route them from the vacuum environment through to the ”air side”, and the precision support base built to suspend the modules in the precise location around the beams.

All the cables and services have to be mobile and flexible to absorb the movements of the VELO halves which will occur with every fill of the LHC. As for the module construction phase, each element must be tested in vacuum with CO2 cooling, with the assembly at the University of Liverpool requiring a full size cooling plant to cope with the power dissipation of a full VELO half. The construction has taken place over the last 8 years and is now in the most exciting final phase, as the modules are delivered to Liverpool. The team are now occupied with precision mounting of the modules on the support base and the testing protocol is in full swing, with a full half of the VELO already assembled and qualified.

In the meantime the VELO teams have been hard at work at the LHCb experimental hall ensuring that the insertion of the VELO halves into the tank and the connection to all services will go smoothly. The boxes which host the VELO modules have a complex corrugated shape which is designed so that the particles originating from the interaction region cross the smallest amount of material before the first VELO measurements. The boxes have to withstand up to 10 mbar of pressure difference and must be leak tight to avoid contamination of the primary vacuum. They are milled out of specially manufactured forged Aluminium blocks with a very small and homogeneous grain size structure. After a long and multi-step milling process at Nikhef the foils achieve their final shape with a thinnest region of 250µm. The foils are then thinned still further along the central band using a chemical etching technique at the CERN surface treatment lab, to achieve a final thickness of 150µm. After further surface treatement, including NEG coating, the delicate boxes are then installed in the VELO tank, ready to receive the modules, and in a final step the wake field suppressors, which connect the VELO to the RICH beam pipe downstream and the SMOG II system upstream, must be installed. The Wakefield Suppressors are a circular crown of spring-like corrugated fingers constructed from a 50 µm thick CuBe2 sheet. They guide the mirror currents of the beam, are flexible so they can open and shut with the VELO movements while forming a continuous mechanical connection between the VELO system and the outside world. The final connection of the VELO WFS was recently achieved, followed by a successful bakeout of the entire assembly and pump down to nominal vacuum. The tank is now ready to receive the VELO halves!

The transport of the precious VELO halves from Liverpool to CERN, followed by lowering into the cavern and the journey to the alcove to be installed in the tank, is a moment of high drama for the VELO group. Before trying it out with the real detector, a dummy half, loaded with weights to mimic the real distribution of the final detector, and fully equipped with telemetry devices, made the journey from Liverpool to CERN, arriving on 12th November. The telemetry data are designed to show what vibrations will be suffered by the VELO and prove the performance of the transport mechanism, showing if it is up to the task. 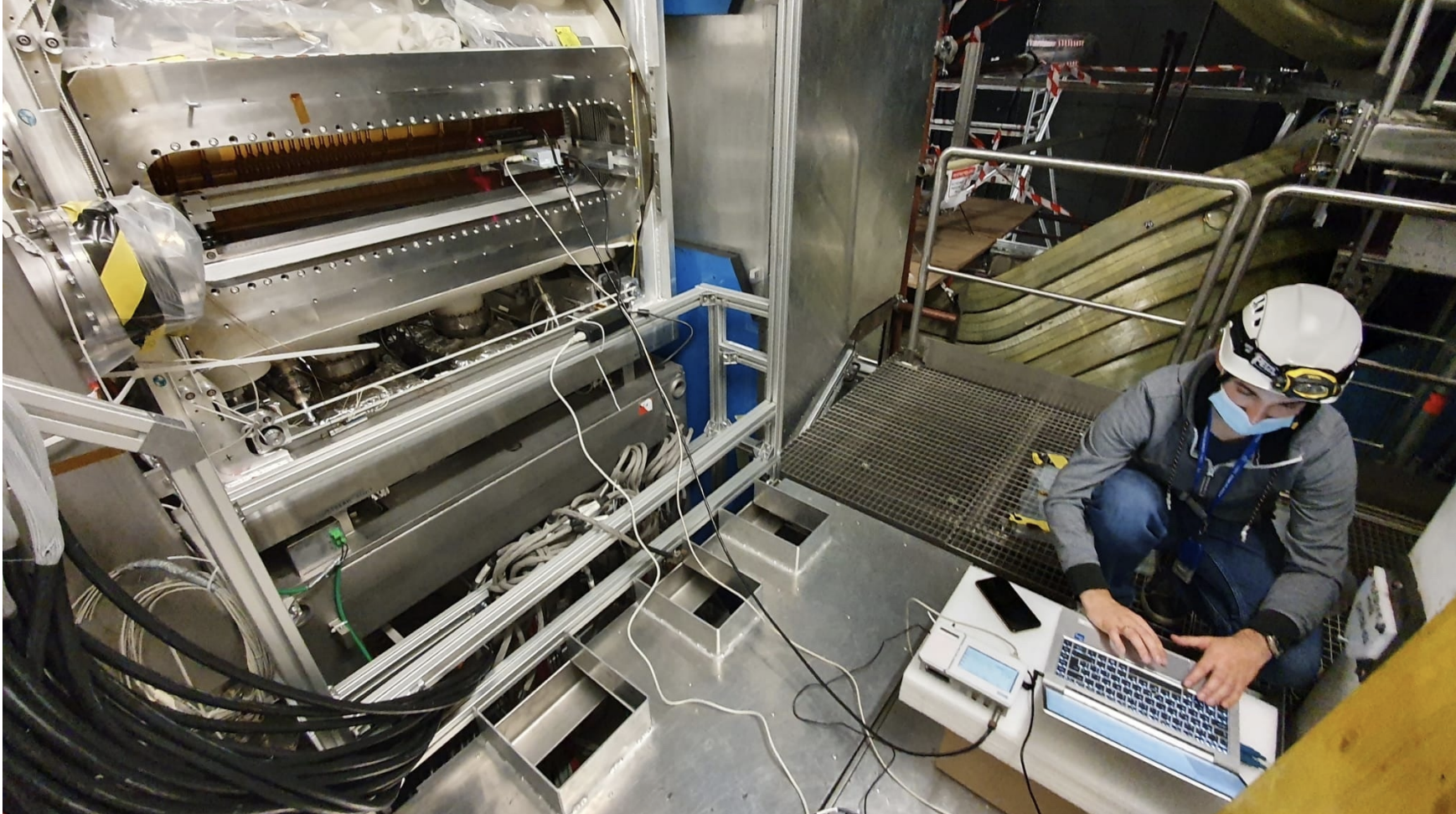 The VELO dummy was received at Point 8, with support from the CERN logistics, unloaded from the external frame in the assembly hall, lowered down the shaft into the LHCb experimental area and then winched over the experiment to the far side. The vacuum tank was then wheeled on the specially modified platform through to the VELO alcove, then lifted by two specially installed small cranes before being rotated into the final orientation and placed on the rails, ready to be pushed gently into the VELO tank. The dummy transport was very successful and enabled the team to refine the procedures before the transport of the first VELO half.

Figure 5. VELO dummy half being lowered down the LHCb shaft, and then being lifted over the experiment before accessing the far side for installation.

LHCb is now close to the completion of its Phase-I upgrade goals, despite the challenges related to the COVID-19 pandemic. The period up to Spring 2022 will be needed to complete commissioning and testing in light of the start of LHC Run 3. With the transformed experiment reading out at 40 MHz LHCb will collect unprecedented sample sizes of reconstructible flavour decays and can look forward to exciting results in the near future.

Top image: Photo from the STFC-funded assembly and quality assurance of the VELO detector for the LHCb experiment being carried out at the University of Manchester. Credit: STFC