Progress towards a new calorimeter concept for the upgrade of CMS

Over two years ago we wondered if a new era for calorimetry was starting [1]. Compelled by the results reported in the Technical Design Report (TDR) of the High Granularity Calorimeter (HGCAL) for the upgrade of the CMS detector in Phase-2 of the LHC [2], many challenges lay ahead on all engineering fronts, and for construction, commissioning and integration within the experiment. In the mean time, some hurdles have been crossed, others still lie ahead.

The main trial ahead comprises maintaining the good performance of the endcap calorimeter covering the 1.5<|η|<3 region, over nine years of operation in between 2029 and 2038. An unprecedented integrated luminosity of 3 ab-1 of proton-proton collisions shall be used to improve our knowledge of the Higgs couplings, to perform precision measurements in the electroweak and strong sectors, as well as in searching for new physics. The successful full exploration of such a physics programme depends crucially on the ability to trigger efficiently and reconstruct precisely in a regime where over 140 simultaneous proton-proton collisions will occur. As a 5-D imaging calorimeter, providing energy, position and timing, HGCAL is expected to provide the necessary pieces to resolve the details of particle showers in a dense regime, thus enabling precise particle flow reconstruction both online and offline.

In 47 sampling layers will measure particle showers within its 9.97λ, with the first 26 layers summing up to 27.7X0 and focussing on the measurement of electromagnetic showers. Hexagonal Si modules of different thicknesses (120 µm - 300µm) and with different pad areas (0.52-1.18cm2) will act as the sensitive material in the regions where the fluence is harsher, while plastic scintillator tiles, coupled to SiPMs of different areas, will be used at higher radii and towards the back of the calorimeter, where dose and fluence permits. Lead, copper tungsten and stainless steel are used as absorbers. To ensure precise intercalibration of the >6M channels, it is targetted to maintain overall good discrimination of minimum ionizing particles against noise, guaranteeing S/N>3 even at the end of operation. The full volume will be cooled to -30oC with the help of pipes carrying CO2, which will be embedded in the Cu cooling plates to which the Si sensors will be attached to. A PCB housing the front-end ASICs will be used on the other side of the sensors and it will, in turn, connect to motherboards containing data-concentrator ASICs, links to the off-detector control, trigger and DAQ cards. The structure and support is made by means of cassettes of 60o or 30o in azimuth. The cassettes are one of the major challenges of HGCAL, in particular in the electromagnetic section where they are only about 25mm thick, which includes cooling, two layers of modules and services. 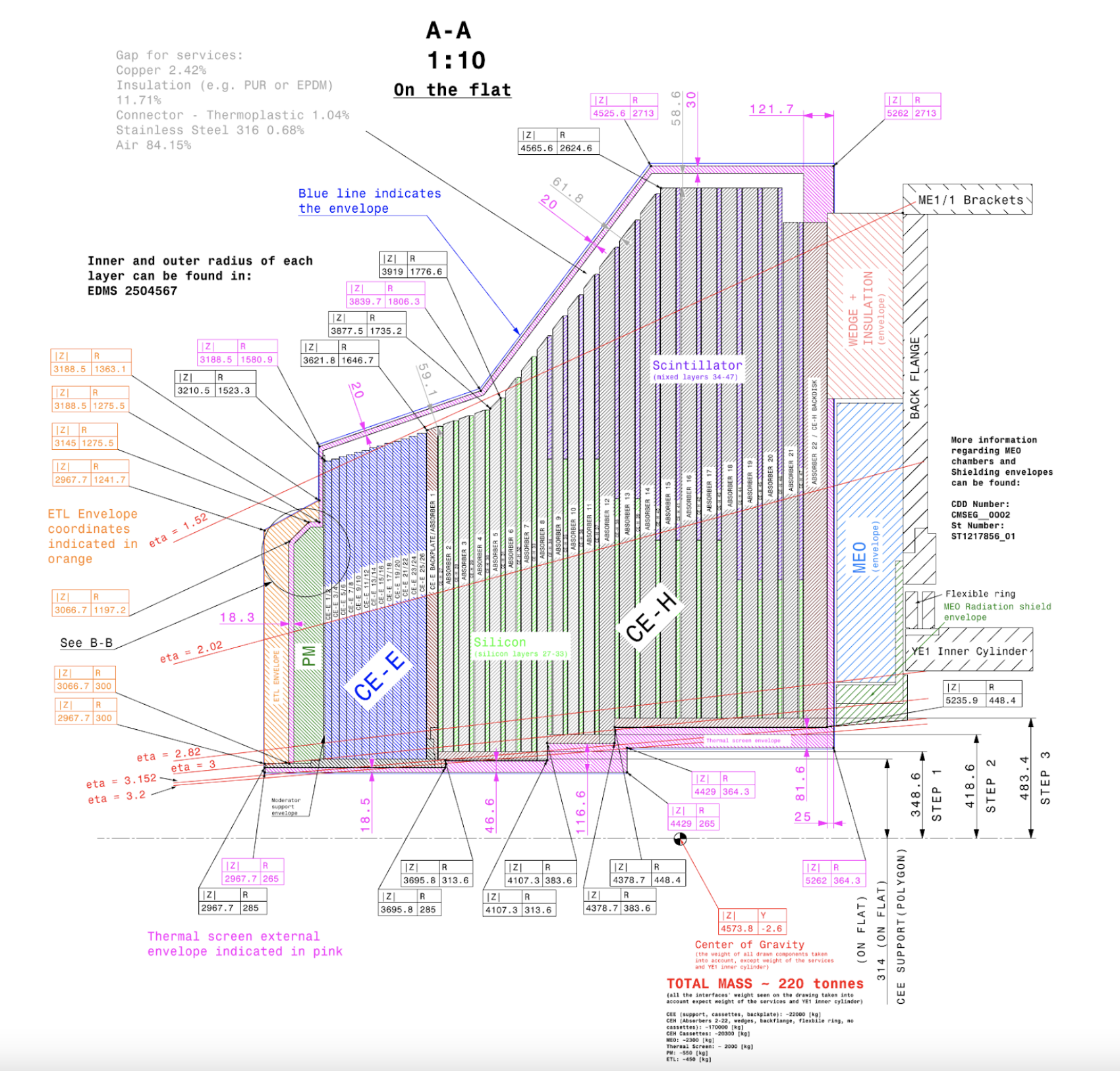 Since the TDR progress has been made on different fronts, combining the effort of an international collaboration where several groups in EP play key roles: EP-CMX, EP-CMG, EP-CMO within the CMS team, as well as EP-DT (including people from the previous EP-LCD group) and EP-ESE.

A total of five functional module assembly centres (MACs) started producing the first 8’’ prototypes, some of them having been used in 2021 beam tests with the latest version of the front-end readout chip (HGCROC). A sixth MAC is expected to be fully qualified for assembly this year. When in production, the MACs are expected to provide the approx. 26k modules needed for HGCAL, by producing at a rate of 12 modules/day/MAC

Cassette assembly will be made in two sites: CERN, and Fermilab with the main goal of having the assembly sites and procedure qualified by 2023. In the meantime, mock-up prototypes have been produced and are being actively used to fine tune the assembly plans and mechanical constraints.  The mechanical design is close to being finished, and the machining of the first large stainless steel plates is scheduled for the summer. 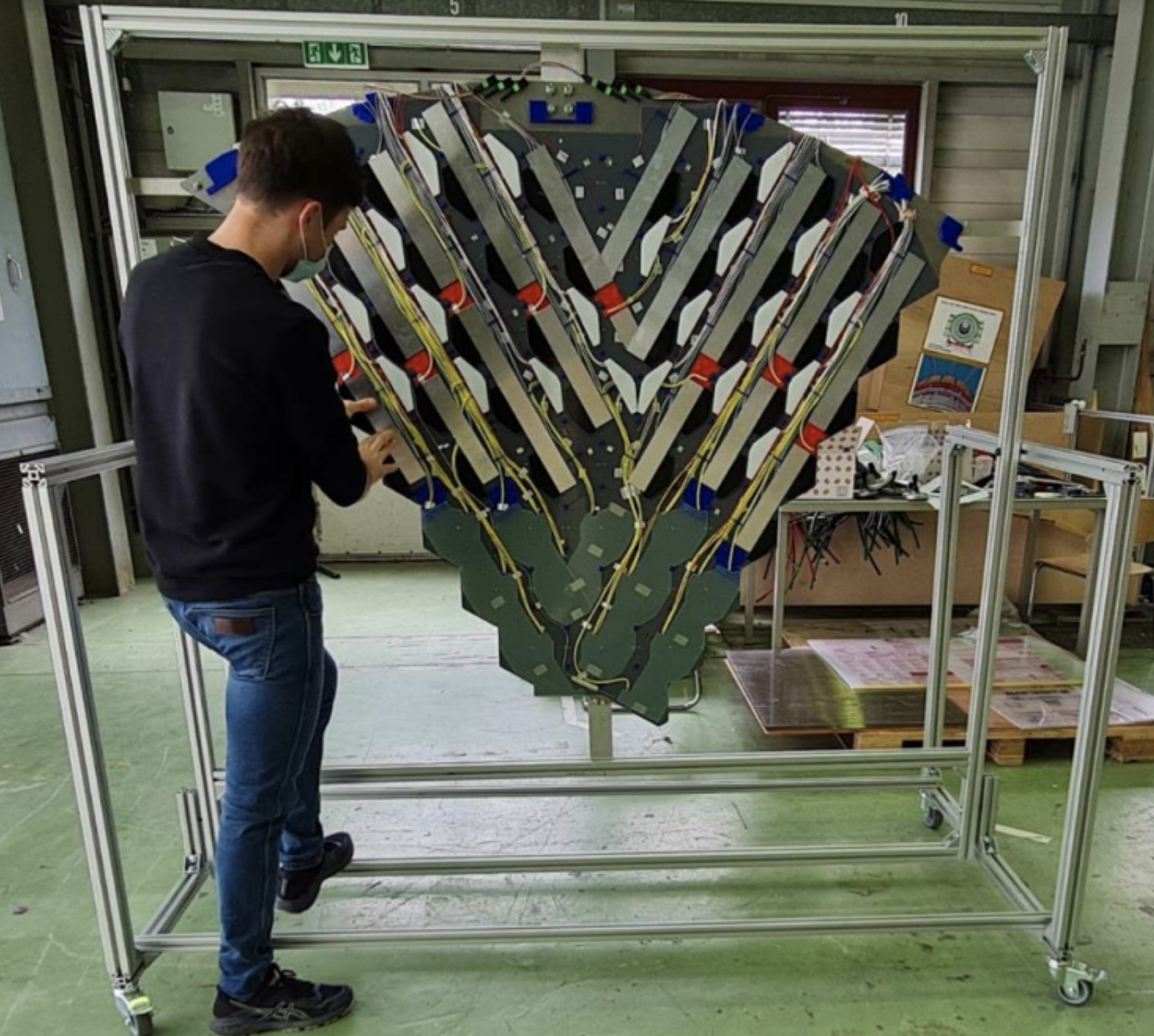 Assembling a cassette mock-up in building 186.

The electronics specifications and prototypes have also evolved. The HGCROC will provide the measurement of energy, by means of an ADC or a TDC using time-over-threshold, depending on the charge. A second TDC is used to provide a time-of-arrival measurement. The third version of this chip has been produced and tested during 2021, and includes several improvements such as increased sensor leakage compensation and an asynchronous clock generator for the linearization of the TDC. The specification, design and prototyping of the remaining electronics chains: concentrators, service and master cards for communication with the back-end has also progressed on several fronts. Special effort is currently put on reinforcing the work on areas which are currently more relevant to the schedule of the project such as the concentrator ASICs and finalizing the module boards for all geometries and densities.

The radiation hardness of the 8’’ bulk Si sensors produced by HPK has been confirmed by extensive tests at CERN, and other collaborating institutes. The quality control measurements performed by HPK have been confirmed with measurements in the clean room at CERN, and the tests of irradiated sensors (up to 1.5-10 x 1015 1 MeV neq/cm2) confirm the very good quality of the sensors and open the door for a pre-series to be tested this year. Additional measurements of the oxide quality are being carried out at the ObeliX X-ray irradiation facility in EP-ESE and at KIT.

A consolidation programme of the SiPM-on-tile system has been carried out throughout 2021 with different SiPM areas and tile-production modes (molded or machined cast-types) tested, including exposure to particle beams. Robustness to aging effects, from operating under hypoxic conditions, started to be tested with a dedicated setup in Maryland. The final layout of the SiPM-on-tile is thus being prepared based on experimental results and first prototypes. In parallel, the assembly of tile modules, with an automated tile wrapping, pick and place tool and quality tests has been fully automated at DESY and at NIU/FNAL.

A small prototype of HGCAL was studied at the CERN's SPS H2 beam facility in 2018. Three papers have been already submitted reporting the setup and first results. As a tail catcher to the HGCAL prototype for the electromagnetic and first part of the hadronic section, the Analogue HCAL from the CALICE Collaboration was used [3]. The most recent paper [4] describes the performance of the prototypes in positron beams with an energy up to 300 GeV. The paper reports a good understanding of the evolution of the showers in these prototypes, with the axis-angular- and energy-resolutions according to the expectations set in the TDR, including a stochastic term of around 22%. 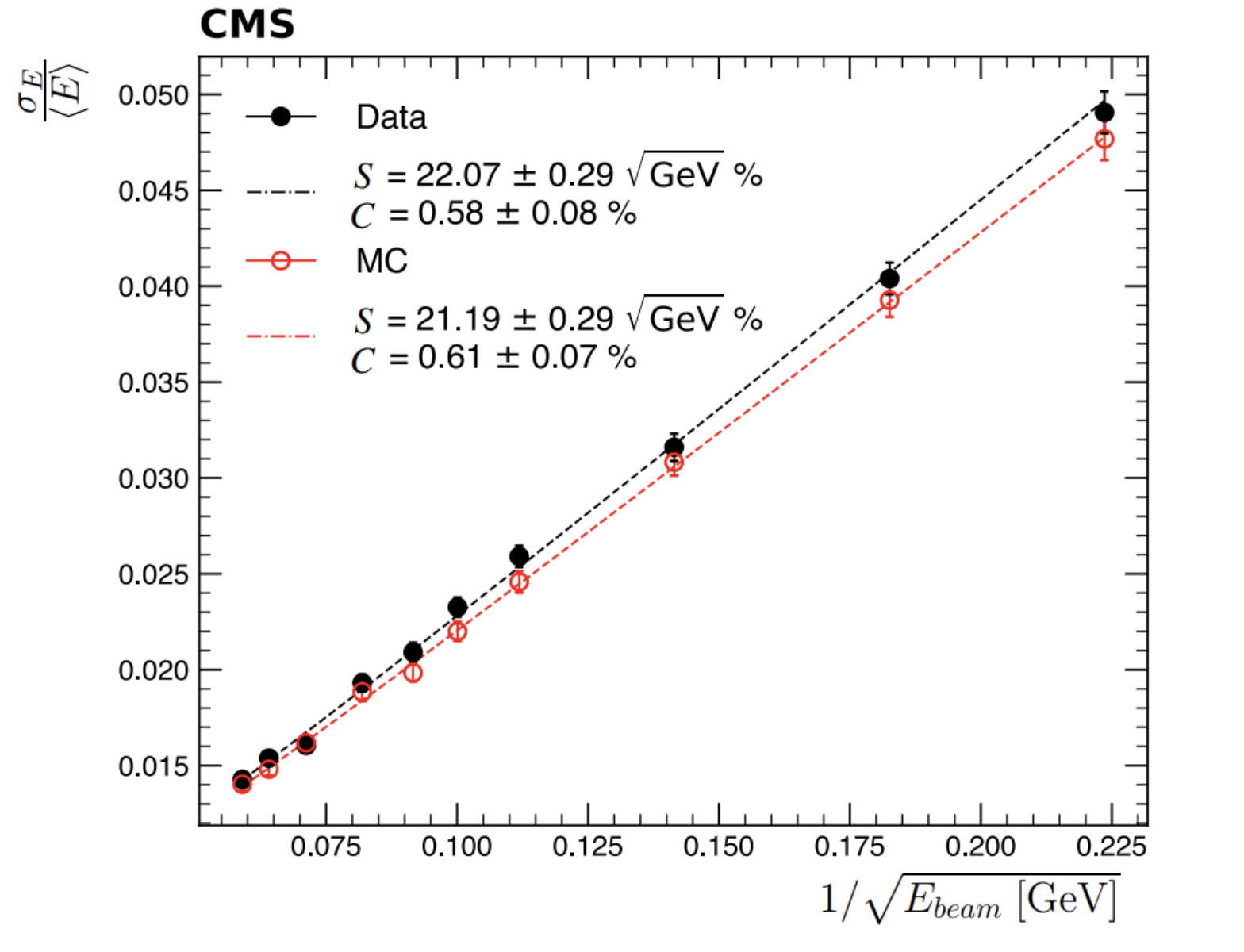 Measured positron energy resolution for data and simulation in the 2018 test beam setup.

The shower reconstruction algorithms being developed for Phase II have also been tried successfully with beam-test data. The so-called CLUE algorithm (CLUstering of Energy) [5,6]  is expected to provide a solid baseline for physics performance and inputs to a particle-flow oriented clustering framework (TICL - interactive clustering framework), both meeting the fast performance requirements of the high level trigger of CMS, where a rate of maximum rate of 7.5 kHz is expected [7]. These offspring algorithms are also being explored for FCC-type detectors. In addition there is investment in exploring machine-learning pattern recognition algorithms to boost further the deployment of particle flow combining HGCAL, the CMS tracker, the muon and timing detectors, at the HL-LHC.

With a clear plan ahead towards materializing this new calorimeter concept, and experience being built from first prototypes, the HGCAL community is aiming to achieve some critical  milestones this year: fully qualified module and cassette assembly sites, larger scale system tests with pre-series sensors and electronics. Owing to its complex architecture caution is required to make sure that successful finalization, integration of all mechanics, electronics, firmware and system test elements are possible. In this aspect, CERN is fully engaged as a host laboratory, with EP members deeply involved in the main fronts of this exciting project.

The author would like to thank D. Barney, P. Bloch, K. Gill, and M. Mannelli for their valuable suggestions.

[3] C. Adloff and others, “Construction and Commissioning of the CALICE Analog Hadron Calorimeter Prototype”, JINST 5 (2010) P05004