Setting a roadmap for R&D on Detector Technologies 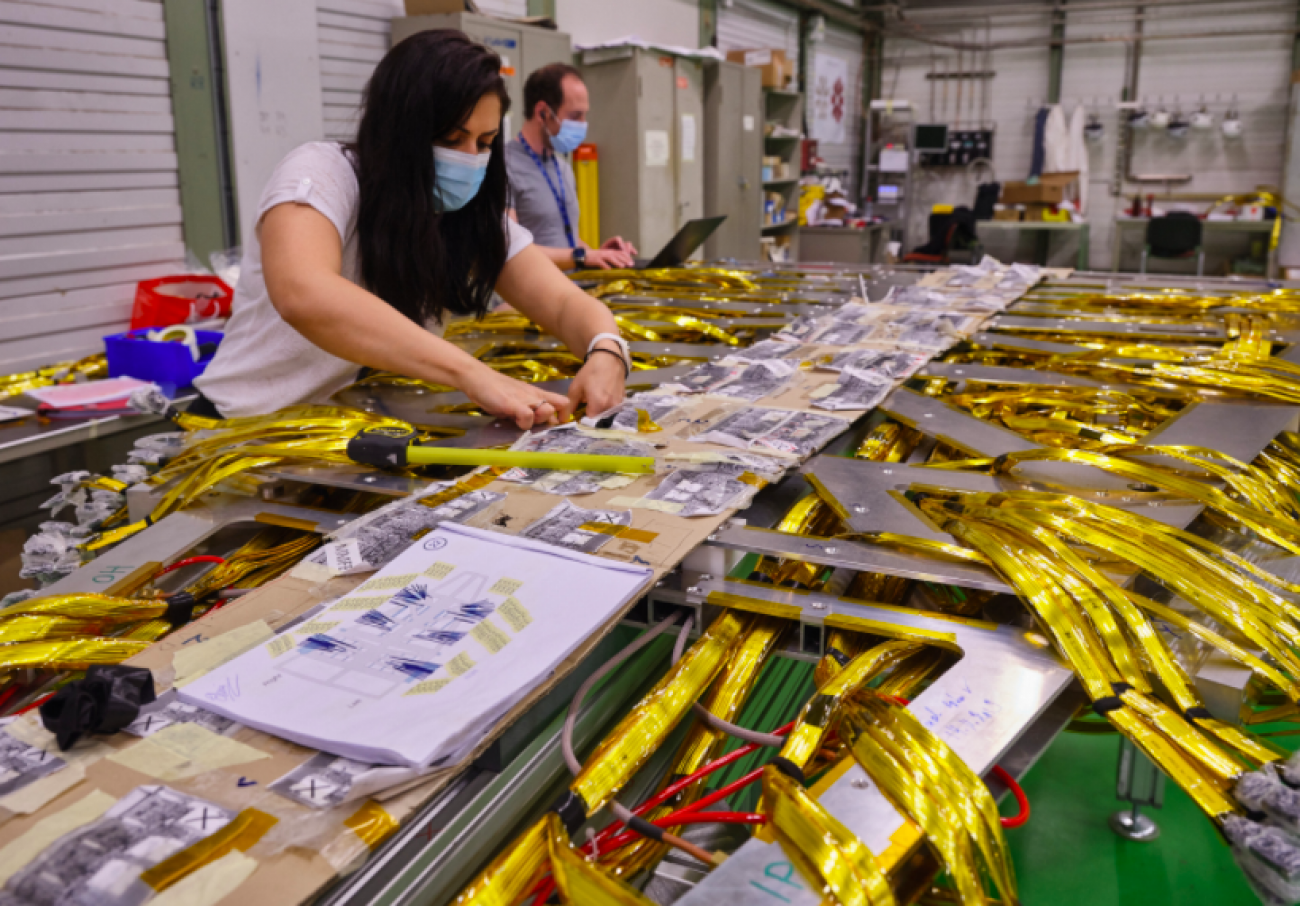 Research is a global game, yet to be successful requires coordination at regional, national and international level. The success of the LHC programme highlights the role of open-door policies and diverse bottom-up community initiatives in technological R&D for the efficient construction and operation of the accelerator and experiments. Future HEP facilities, like the proposed FCCs or linear colliders, that could inaugurate the post LHC landscape, act as a rapidly expanding innovation hub that continues to attract ambitious projects, leading talent, and targeted investment from around the world.

The recent update of the European Strategy for Particle Physics documented the priorities for the field along with the challenges that should be addressed to allow for a reliable and sustainable construction of any post-LHC collider. It is not an overstatement to say that the depth with which we can address open mysteries about the universe strongly relies on our ability to innovate instrumentation and research infrastructures. Key for succeeding in this endeavour are developments in detector technologies. ESPPU called upon ECFA to develop a European detector R&D roadmap that further promotes the synergistic growth of scientific research, engineering and education.

To this end, ECFA has launched a series of symposia that ran from March to May 2021 for the development of a community roadmap based on a bottom-up approach and taking into account progress with emerging technologies in adjacent fields. The target is to produce a very inclusive and balanced roadmap, setting concrete goals and steps while also considering transformational R&D and emerging technologies. The roadmap will guide the detector R&D in the short, medium and long-term future in line with the physics priorities defined by the European Strategy.

ECFA has also called for a dedicated Detector R&D Roadmap Panel that organizes the process and will deliver the final roadmap document. Susanne Kuehn, scientific secretary of the panel explains: “The panel is supported by nine task forces organized by topics with a special focus on technologies that need further development to exploit the physics opportunities of future machines”. Six of the task forces focus on detector technologies including gaseous detectors, liquid detectors, solid state detectors, photon and particle identification detectors, calorimetry and quantum & emerging technologies [see also previous EP article: [CERN’s launches Quantum Technology Initiative]. The other three task forces concern the related cross-cutting areas of  electronics, integration and training for the next generation of detector technologies experts. Kuehn notes that “In addition we strive for collaboration with other fields/disciplines to profit from synergies in these developments. Currently an advisory panel includes experts from APPEC, ESA, LEAPS, LENS, and NuPECC [1].”

Following the consultation with the different communities involved in each of these task forces, the Roadmap panel is preparing a strategy document that will be shared as a draft with ECFA, followed by the strategy being presented during the Joint ECFA-EPS session at the EPS-HEP conference before the final document is submitted to ECFA for endorsement and publication to CERN’s Council towards the end of the year, see also the schematic below. Kuehn adds that time-wise the process is rather challenging and the goal is to have a first draft of the roadmap ready by the beginning of July open for further consultation and revisions with the involved stakeholders from ECFA and national contacts. “This would allow public presentation of the roadmap strategy at the end of July during a dedicated ECFA-EPS session, further community feedback  and a smooth submission to ECFA and CERN’s Council by December 2021”. The process so far has gathered a lot of attention and broad engagement from the wider scientific community, research centres, academia and labs through a number of input mechanisms. 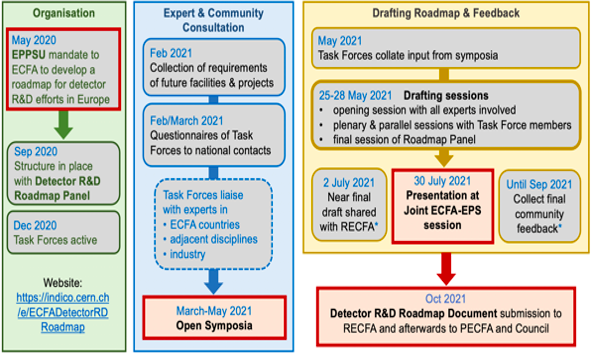 One of the factors testifying to the success of the adopted approach is the structured and diverse approach of the proposed activities. Kuehn points that through this process the task forces are also looking for synergies that can be developed between different facilities in Europe and elsewhere around the world, “think for example of the requirement for high-precision timing which is key for the upgrades of the LHC and future colliders as well as for other facilities”. According to Kuehn, “the group actively works to visualize the guidelines that clearly map these synergies and the milestones towards which we need to work”. Secondly, a key element for advancing with the instrumentation R&D efforts is the high level of attendance at the symposia with more than 1300 registered participants covering all the different technologies required for experiments at colliders, dark matter searches, neutrino facilities, experiments focusing on rare decay processes as well as test and irradiation facilities around Europe.

Finally, Kuehn reminds us of the importance of the pillar of training that is integrated in the development of any future R&D effort. “We not only need to develop certain technologies but also ensure that we train the people and teams who will be in place over the long timescales foreseen for these infrastructure programmes. Giving value in the training of our people not only ensures intergenerational succession but also allows for an in depth cross-fertilization of technologies between different fields”.