SND@LHC gears up for data taking 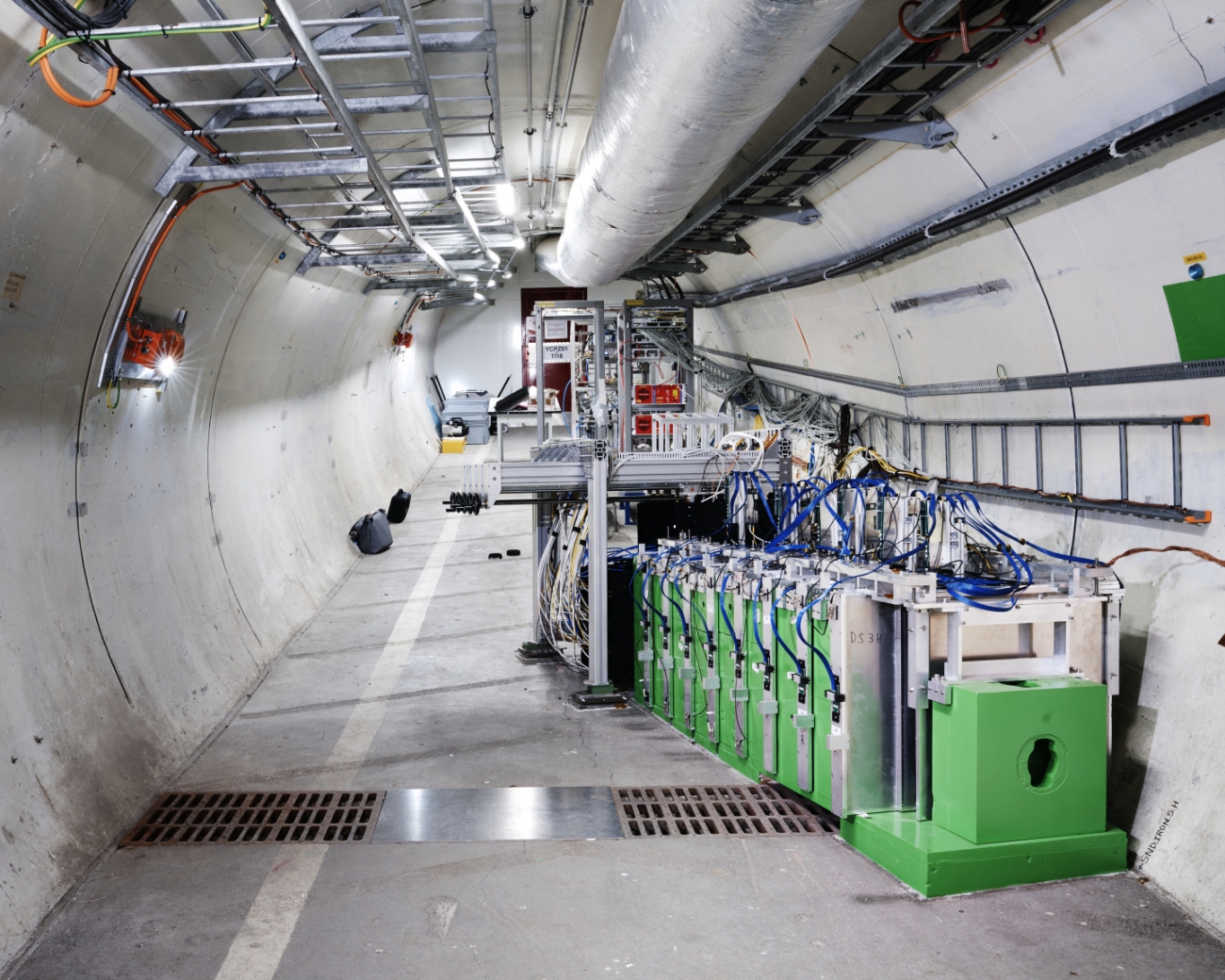 The last fifteen months have been a full-fledged race against the clock for the SND@LHC Collaboration. The experiment was approved by the Research Board in March 2021 with the goal of taking data in Run 3 of the LHC. The Collaboration has had to construct and test the sub-detectors in beam test, prepare the experimental area in TI18, and install and commission the whole apparatus underground. TI18 is the underground tunnel that was used for electrons and positrons injection at LEP. SND@LHC is installed in the entrance section to the LHC tunnel, 480 m clockwise from the ATLAS interaction point (IP1).

The detector has been designed with emphasis on identification of all three neutrino flavours and the direct search for feebly interacting particles. This requires three detector elements: a vertex detector embedded within a heavy-medium neutrino target with good enough resolution to disentangle the neutrino-interaction vertex from the one of tau lepton decays; a calorimeter to measure both the electromagnetic and hadronic energy, with also a good time resolution to measure the time of flight of particles from IP1; a muon system to identify the muon produced in 𝜈𝜇 charged-current interactions and in the muonic decay of tau leptons. Upstream of the target region, two planes of scintillator bars act as a veto for charged particles.

The neutrino target region is instrumented with five walls of Emulsion Cloud Chambers (ECC), each followed by a Scintillating Fibre (SciFi) tracker plane with 250-micron diameter fibres. The ECC technology alternates 300-micron thick emulsion films, acting as tracking devices with micrometric accuracy, with 1-mm thick tungsten plates acting as the neutrino target. In addition to the micrometric position resolution, each emulsion layer provides track segments of charged particles tracks with a few milliradian angular accuracy. The reconstruction of track segments in consecutive films provide the vertex reconstruction with an accuracy at the micron level. The fine segmentation of active films interleaving tungsten plates is motivated by the longitudinal resolution required to observe the tau lepton track and by the need to keep the combinatorial background in the association of track segments sufficiently low over an integrated luminosity of about 25 fb-1, after which the emulsion films are replaced. It also makes the emulsion-tungsten ECC a high-sampling electromagnetic calorimeter with more than three active layers every radiation length, X0, essential for electron identification and discrimination against neutral pion decays.

The SciFi planes provide the timestamp for the reconstructed events with a time resolution that allows the time-of-flight measurements. The combination of the emulsion target and the target tracker also acts as an electromagnetic calorimeter, with a total of 85 X0.

The hadronic calorimeter and the muon identification system consist of eight iron slabs making up 9.5 interaction lengths λint in total, each followed by one or two planes of scintillating bars. The hadronic shower starts developing already in the target region, which adds on average 1.5 λint, for an average total length of 11 λint, thus providing a good coverage of the hadronic showers. The muon identification is mainly based on the last three planes of scintillator bars. These planes have double layers with narrower bars located both vertically and horizontally for higher granularity.

The veto, emulsion target and target tracker are contained in a borated polyethylene/acrylic box acting as a neutron shield from low energy neutrons and, at the same time, maintaining controlled temperature and humidity levels to guarantee optimal conditions for the emulsion films.

The detector exploits all the available space in the TI18 tunnel to cover the desired range in pseudo-rapidity. Since no civil engineering work could have been done in time for Run 3, the size of the tunnel, the tilted slope of the floor, as well as the distance of the tunnel walls and floor from the nominal collision axis, imposed several constraints on the detector design. The detector layout was therefore optimised as the best compromise between the geometrical constraints and the physics requirements. The detector is located in the first quadrant of the transverse plane centred on the nominal collision axis, covering the pseudo-rapidity range 7.2 – 8.4. The energy measurement and the muon identification set a constraint on the minimum length of these detector elements. With the constraints from the tunnel, this competes with the neutrino target volume and the azimuthal angular acceptance that determines the overall flux intercepted, and therefore the total number of observed interactions.

The experimental area in TI18 was prepared between June and September 2021, in parallel with the construction of the sub-detectors and mechanics. All the electronic detectors were fully constructed by October 2021. The commissioning of the complete detector was done on surface in the H6 experimental area during September and October, with the sub-detectors progressively ready to take part. In the same period, two test beams with pions were carried out in the H8 experimental area, aiming at calibrating the response of the hadronic calorimeter. Installation of the detector underground started on November 1st. 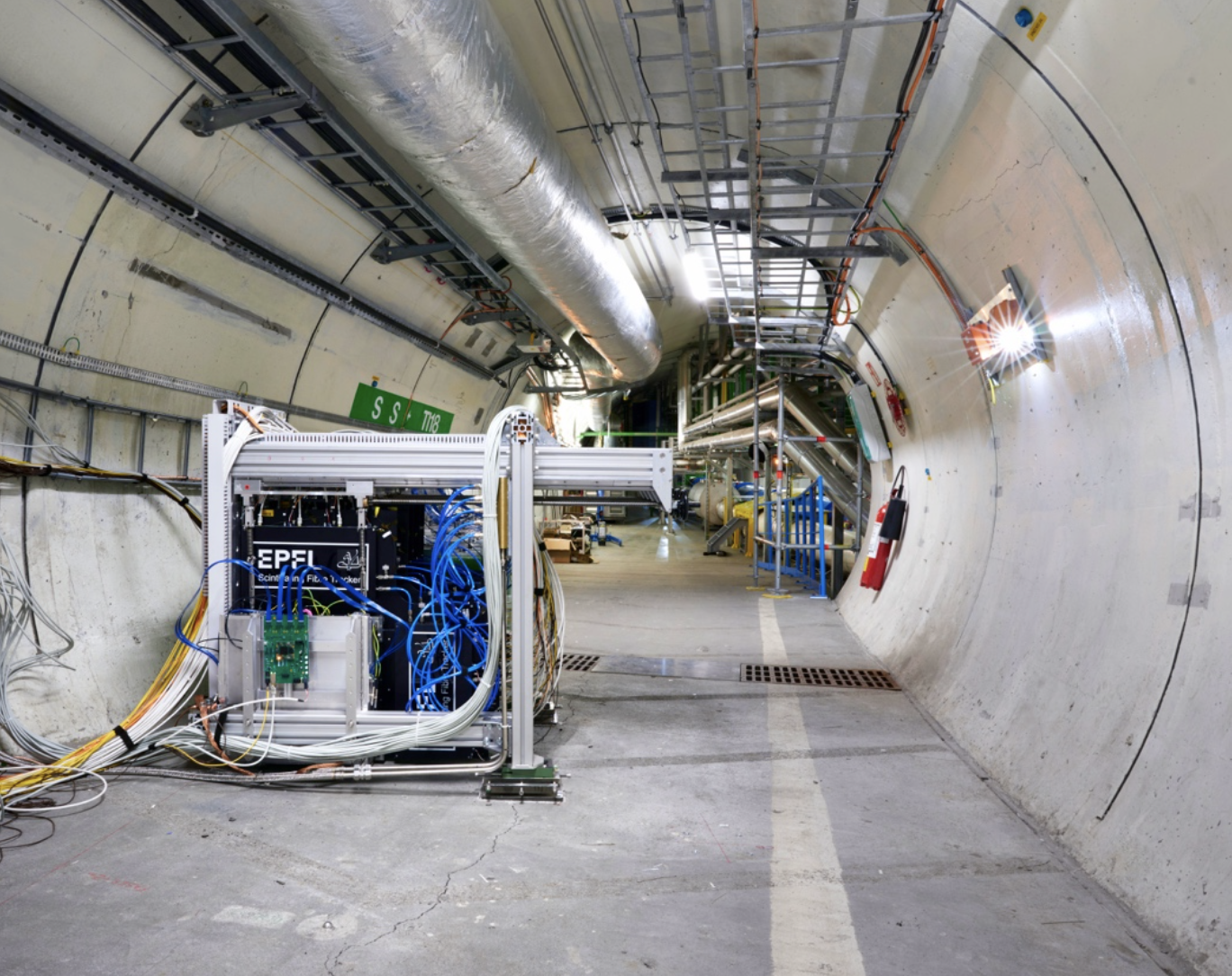 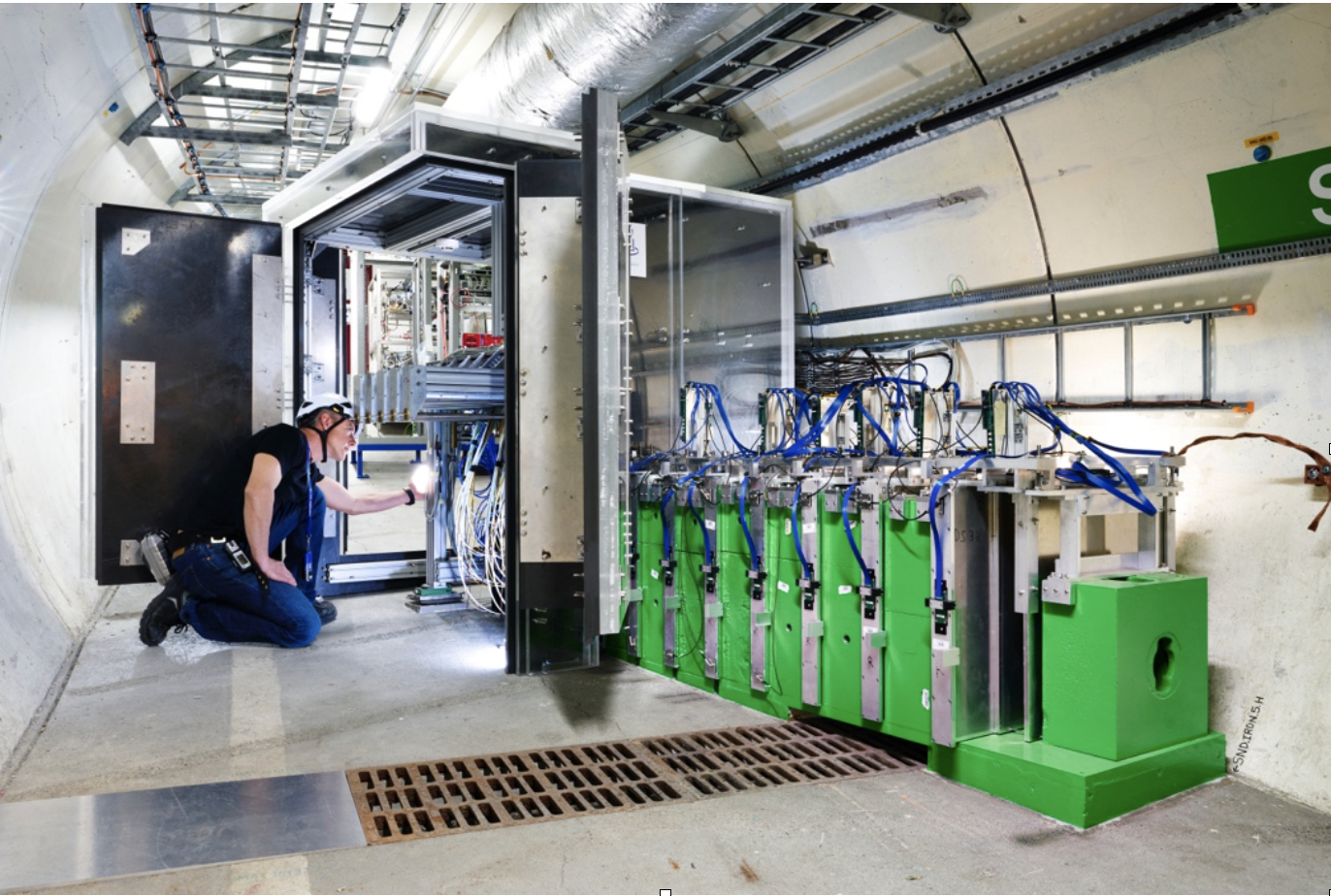 Figure 1: The SND@LHC experiment is located in the TI18 tunnel of the LHC complex in a close distance to the ATLAS intersection region and slightly off the beamline. This location will allow SND@LHC to detect neutrinos produced at small angles with respect to the beamline, but larger than those covered by FASERν. Preparations to host the experiment started in June 2021 with the first components arriving few months later (top) while the last pieces of the equipment were installed in March 2022 (bottom).

By the end of December, the target system mechanics, the SciFi planes and all the scintillator bar stations had been installed and were functioning. The neutron shield surrounding the target region was constructed in January and February 2022 and completed underground by March 15th.  Few weeks later, on April 7th, 1/5 of the target region was partially instrumented with emulsion films, together with a few independent small emulsion bricks to check machine-induced background during the LHC commissioning, as the very final step of the detector installation. The detector has been continuously taking cosmic ray data since the beginning of the year. On April 22nd and May 7th SND@LHC recorded the so-called LHC “splash” events, by detecting the products of the clockwise pilot proton bunches intercepting the tertiary collimators on the left side of ATLAS, 630 m away, as well as those produced on the tertiary collimators right of ALICE by the counter-clockwise bunches, about 3km away. It also registered the first muons from the proton-proton collisions on May 24th.

Figure 2: Event display showing the tracks in two projections (top and side views) of a cosmic-ray muon track recorded by the SND@LHC experiment.

While the small independent emulsion bricks have already been developed, indicating a negligible background level, the collaboration is eagerly looking forward to analysing the first set of emulsion from the target region. The extraction of the emulsion and the installation of a fully instrumented detector are planned for end of July, halfway through the LHC intensity ramp-up. In the meantime, data from the electronics detector are continuously analysed, and the emulsion data processing chain in five institutes is in commissioning with emulsion films exposed at proton beams.