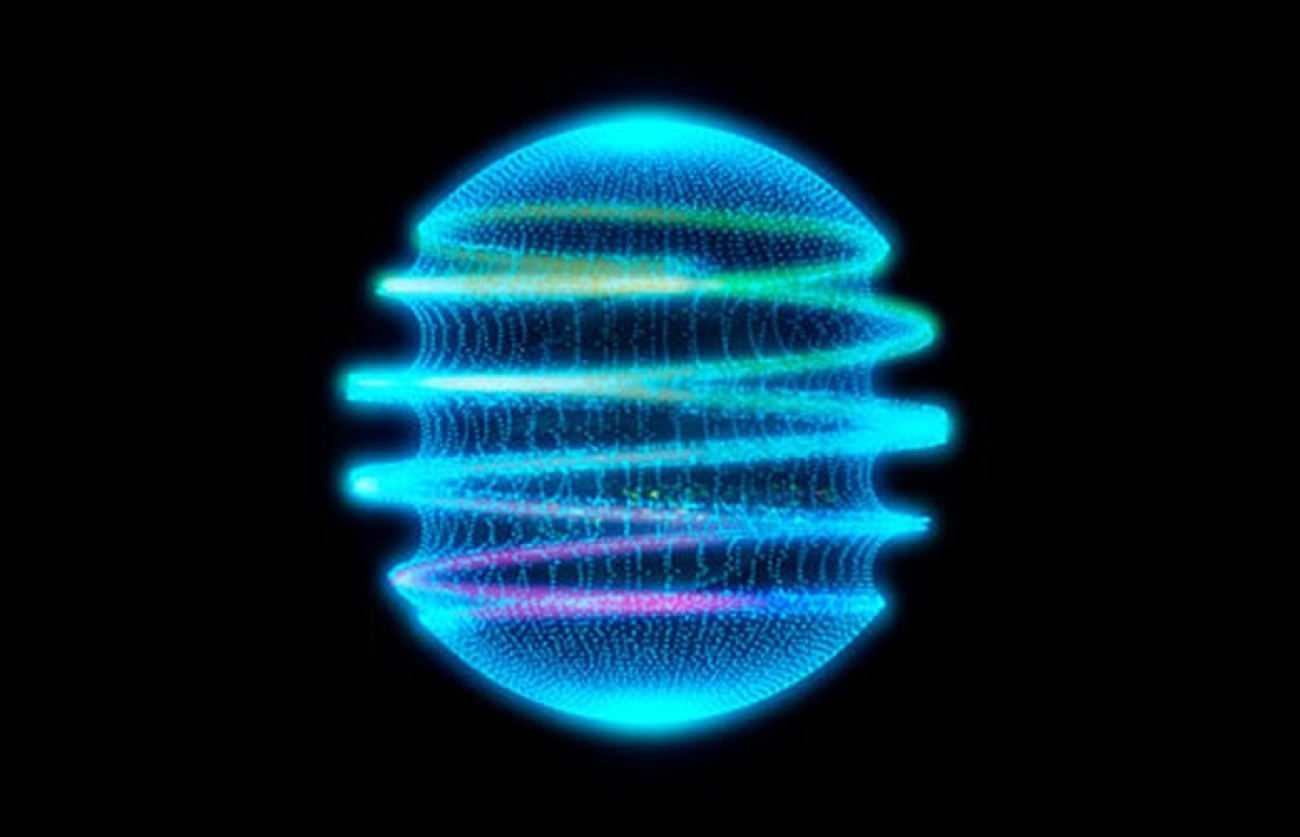 Although neutrinos were discovered more than 60 years ago, they are the most mysterious particles in the Standard Model (SM). While the present data collected at the neutrino experiments can explain several neutrino properties, there are still at least several unanswered fundamental questions in the neutrino sector that need to be clariﬁed. For instance, how many neutrino species do we have? Why are neutrinos so light? Is neutrino its own antiparticle?

To further explore the neutrino sector and answer some of these questions, several long baseline neutrino experiments are planned and under development, including the Deep Underground Neutrino Experiment (DUNE) in the United States [1] and the HyperKamiokande (Hyper-K) detector in Japan [2]. Given the intense neutrino beam, the massive far detector, and the envisaged scale and capabilities of the near detector, DUNE and Hyper-K, both billion-euro experiments, will certainly oﬀer a rich physics program. The main goal of these experiments is to precisely measure the parameters governing neutrino oscillations, namely the mixing angles and the CP-violating phase, and determine the neutrino mass ordering.

DUNE will consist of two detectors: a near detector at approximately 500 meters and a far detector at 1300 kilometers from the neutrino beam source at Fermi National Accelerator Laboratory in Batavia, Illinois. The novel neutrino detector technology that this experiment will utilize is currently being tested at CERN in the ProtoDUNE project [3]. Neutrinos at DUNE will be produced in the decays of secondary particles emerging from the collisions of 120 GeV protons on a graphite target as part of the Long Baseline Neutrino Facility (LBNF).

The proton collisions on target will not only yield neutrinos but, in addition, high intensity photon ﬂuxes will be produced. While, at ﬁrst sight, such photons may seem redundant, the authors of [4] have recently shown that they can be applied to successfully test some other unknowns in high-energy physics, orthogonal to the ones related with neutrinos. In particular, these photons can produce axion-like particles (ALPs).

Axions are hypothetical particles that have been widely scrutinized for decades. Their primary purpose is to explain the lack of observation of CP symmetry violation in quantum chromodynamics (known as the “strong CP problem”) [5]. In addition, thanks to the rather special way (that goes by the name of misalignment mechanism [6]) through which axions can be produced in the early Universe, they are also a viable candidate for dark matter. Both for solving the strong CP problem and explaining dark matter, the axions need to be rather light, below eV-scale. In contrast to the axions, the mass of ALPs which arises in various new phyics scenarios can vary across orders of magnitudes. The authors of [4] were motivated by a somewhat higher ALP mass window, extended to GeV-scale. They envisioned a minimal scenario where ALPs interact with 2 photons; such interaction is typically described by the term gaγαFµνF˜µν. Here, gaγ is the interaction strength, a stands for the ALP ﬁeld, and the remaining terms are the ﬁeld strength tensor of an electromagnetic ﬁeld and its dual.

Only this single term suﬃces for inducing rich physics described by the Feynman diagrams shown in Fig. 1. Namely, the ALPs are produced in the target from the photons interacting with nuclei through the so-called Primakoﬀ process (left panel of Fig. 1). While most of the photons would simply get absorbed, the small fraction of those that can undergo the new physics interaction would yield a signiﬁcant ﬂux of ALPs. At the near detector site, ALPs can then either interact via reverse process (middle panel) and hence produce a photon, or they can decay into a photon pair (right panel). In either case, the ﬁnal state photon(s) can induce particle showers that can be detected. 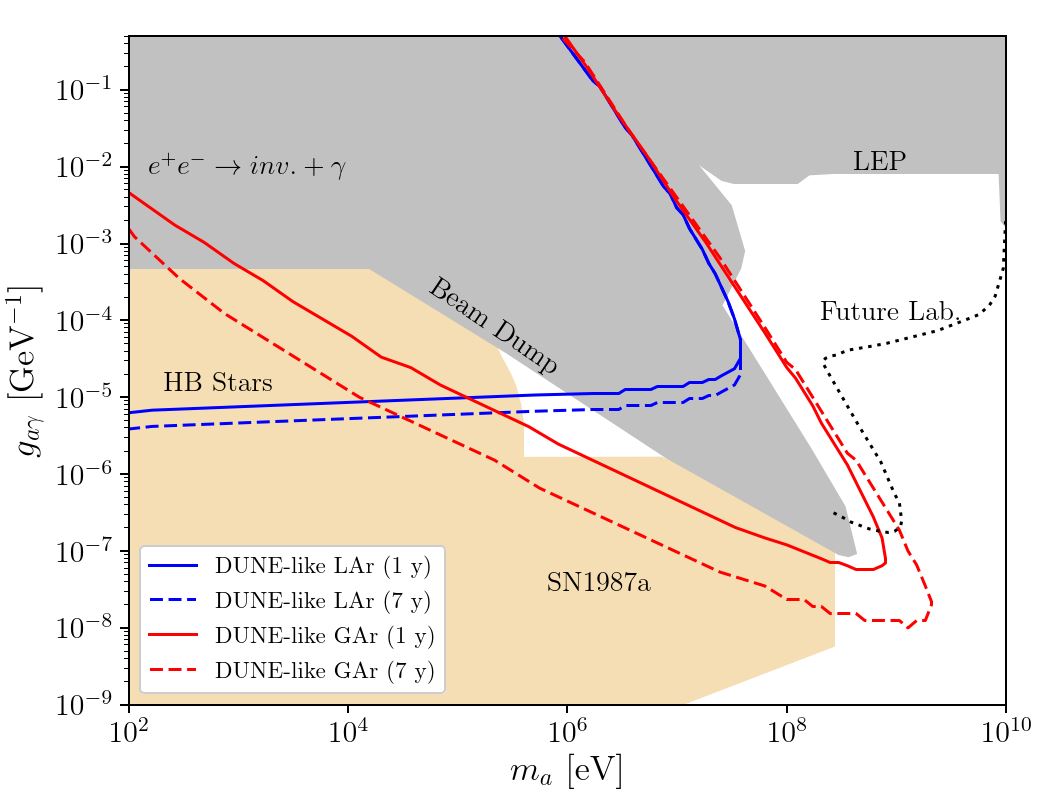 The ﬁndings of [4] are summarized in Fig. 2. Here, in the parameter space of gaγ and ALP mass, ma, the calculated sensitivity of the DUNE experiment is shown and compared with astrophysical and other terrestrial limits as well as projections from several other near-future experiments. Let us note that the astrophysical limits depend on the underlying ALP model details. The blue solid (dashed) line shows the DUNE sensitivity for ALP detection through scattering using one (seven) year(s) of data taking. The near (sub)detector used for this study is liquid argon (LAr) detector where the scattering events will be more frequent than in less massive gaseous argon (GAr) detector. The sensitivity is almost independent on the coupling in the ma < 10 MeV region, above which it suddenly decreases. This is because, at ma around 10 MeV ALPs typically decay before reaching the detector located around 500 m from the beam source. The solid (dashed) red line shows the sensitivity for the ALP decay search in GAr detector with one (seven) year(s) of data taking. That sensitivity is clearly stronger then the one obtained from scattering for MeV-GeV ALP masses. Notice that sensitivity limits both from scattering and decays either intersect or enclose the unconstrained triangular region, also known as the “cosmological triangle”. This region is at the border of astrophysical (horizontal branch stars and supernova cooling limits) and terrestrial beam-dump limits, and it was so far thought that it can only be ruled out using arguments from standard cosmology. The authors of [4], however, have now clearly demonstrated that even after a single year of data taking, experiments like DUNE will have the exceptional power to practically probe the whole triangular region using the ALP decay channel. Note also that while the scattering channel sensitivity is subdominant to the decay channel, it can be also clearly seen that such search alone can rule out sizeable portion of the triangle.

While closing the cosmological triangle is the main ﬁnding of [4], it is notable that certain currently unconstrained region at ma ≃ 1 GeV will also be tested at future neutrino experiments like the DUNE near detector complex, as also visible from Fig.2. We should point out that several ongoing and planned projects, some of them based at CERN, will be sensitive to higher mass regions. For instance, recently approved CERN experiment, FASER [13], will be able to test couplings down to gaγ ∼O(10−6). Another proposed CERN experiment, SHiP [8], could extend even further down to gaγ ∼ O(10−7). In contrast, the values of ma up to 10 GeV could be probed at the Belle-II experiment [9] at KEK.

In conclusion, the authors of [4] have demonstrated exceptional capabilities of future neutrino experiments to probe non-neutrino physics. They discovered that the sensitivity to ALPs reachable at DUNE could complement and improve the bounds from several other experiments. In particular, DUNE is expected to yield world best limits on ALP masses in MeV-GeV region. This nicely illustrates the synergy between diﬀerent areas of high-energy physics, namely how with developments in one area (in this case neutrino physics) other ﬁelds could proﬁt immensely.