ALICE gears up towards a rich Run 3 QCD programme 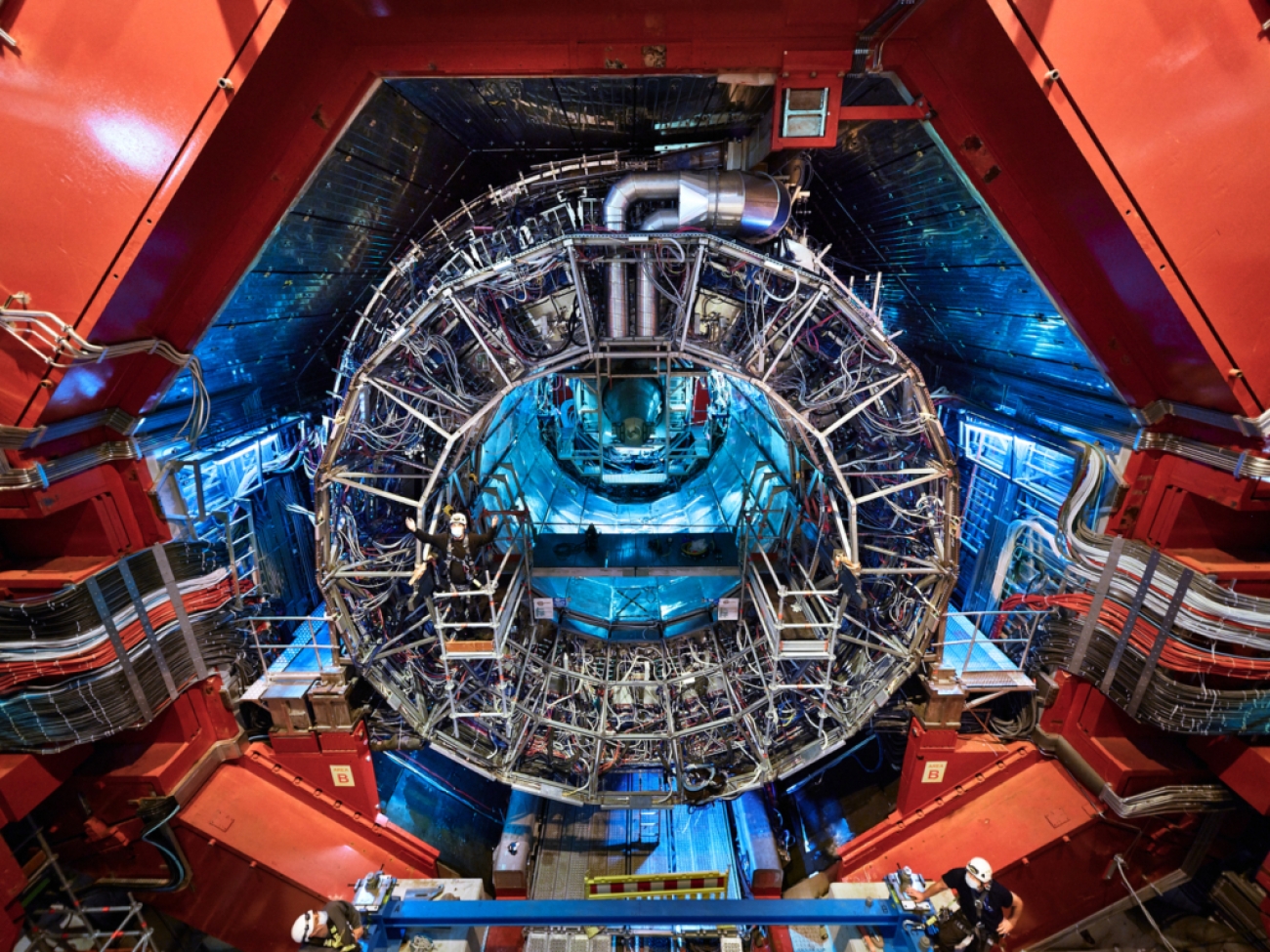 Quantum Chromodynamics (QCD), the theory of strong interactions, is characterised by a rich phase diagram. The elementary coloured degrees of freedom of the theory, quarks and gluons, under ordinary conditions are confined in colour-neutral hadrons and get free to propagate over distances larger than the typical size of a hadron (about 1 fm) only in an extremely hot or dense environment. Lattice-QCD simulations and calculations based on chiral effective Lagrangians predict that in these conditions hadronic matter undergoes a phase transition to a quark-gluon plasma (QGP). Ultra-relativistic heavy-ion collisions at the LHC and at top RHIC energy provide experimental access to the QGP phase. The ALICE experiment was designed specifically for heavy-ion physics at the LHC, with a redundant tracking system and several systems for particle identification. The detector consists of a central barrel, a muon spectrometer at forward rapidity and a set of detectors for triggering and event characterisation.

The results from the RHIC programme and the first two Runs at the LHC have revealed the QGP as a strongly-coupled (liquid-like), high-density and low-viscosity medium in which colour charge is deconfined. Research is now moving towards high-precision measurements, in order to constrain the properties of the QGP and determine its equation of state and characteristic parameters; for example: the temperature and its time evolution, the shear and bulk viscosities and the transport coefficients. The full characterisation of the properties of the QGP requires high-precision measurements of light and heavy flavour, quarkonium, jet and (real and virtual) photon production over a wide momentum range. Unexpected indications for collective effects have been observed also in high-multiplicity collisions of ‘small systems’ (proton-proton and proton-nucleus), opening a new direction of research on the gradual emergence of high-density QCD effects with increasing event activity in hadronic collisions and motivating an extended data-taking programme for ALICE also with small colliding systems in Run 3. This programme will also boost the ALICE studies of QCD process with jets and heavy-flavour, of light (hyper)nuclei production and of hadron-hadron strong interactions, which sparked from the large Run 2 pp sample at 13 TeV.

To pursue these scientific goals, the ALICE Collaboration has prepared, and is completing during the ongoing LHC Long Shutdown 2, a major upgrade of the experimental apparatus that will operate during Runs 3 and 4. The detector upgrade is driven by the following requirements.

●Improvement of the track reconstruction performance, in terms of spatial precision and efficiency, in particular for low-momentum particles, in order to select more effectively the decay vertices of heavy-flavour mesons and baryons, and to separate prompt and non-prompt charmonium states.

● Increase of the event readout rate up to 50 kHz for Pb-Pb collisions in continuous readout mode, that provides the highest possible efficiency for low-momentum processes. This increase enables recording during Runs 3 and 4 of a sample of minimum-bias collisions corresponding to the full integrated luminosity of more than 10 nb-1 that the LHC can deliver. This sample will be larger by two orders than the Run 2 sample.

● Consolidation of the charged-hadron, electron, muon, photon and jet identification capabilities of the apparatus, which are crucial for the selection of heavy-flavour, quarkonium, light nuclei and dilepton signals at low momentum.

The future physics programmes for high-density QCD with small and large colliding systems and QCD in the pertubative and hadron interactions sectors are extensively discussed in the HL-LHC Physics Yellow Report and in the ALICE extended pp running note. Here we highlight a few prominent aspects, for which the ALICE contribution will be central.

QCD studies in the perturbative and hadron-interaction sectors with pp collisions.

During Run 2, ALICE developed a QCD programme in pp collisions with strong contributions to the field of jet production and substructure, also including charm jet substructure, in a kinematic range unique at the LHC. This programme will be consolidated during Run 3 thanks to the higher luminosity: as an example, ALICE performed the first direct measurement of the dead-cone in gluon radiation at colliders with Run 2 data using D-meson-tagged jets. In Run 3, a scan of the mass dependence of the effect will be possible, by utilizing low-energy jets tagged by fully-reconstructed heavy flavour (charm and beauty) hadrons. Figure 1 (left) shows the strong suppression of small-angle splittings in B-tagged jets relative to inclusive jets. The experimental programme with pp collisions in Run 3 also includes precise measurements of light and hyper nuclei production, as well as of hadron-hadron interactions. Elucidating the production mechanisms of nuclei has an impact on the searches of Dark Matter annihilation into nucleus-antinucleus pairs in Space, for which nuclei produced in cosmic-ray interactions are the main background. During Run 2, the studies of proton-hyperon correlations in momentum space opened up a new direction for high-precision tests of the strong interaction among hadrons. In Run 3 these initial measurements will gain in precision and will be extended to rarer pairs (see Figure 1, right). Beside their intrinsic interest, the results are expected to have significant implications for the equation of state of matter in dense neutron stars.

Figure 1: QCD studies in the perturbative and hadron-interaction sectors with pp collisions. Left: Expected suppression of small-angle splittings in B-tagged jets relative to inclusive jets, based on PYTHIA8 simulations. Right: Expected precision of the Ω-Ω correlation function, simulated based on Coulomb and strong (HAL-QCD potential) interactions.

Characterising the macroscopic properties of the QGP with unprecedented precision.

The long-wavelength behaviour of hot and dense QCD matter can be described in terms of fluid and thermodynamic concepts and it is experimentally investigated using multi-differential azimuthal measurements of low-momentum hadron production, as well as of electromagnetic radiation. For example, the temperature of the early stage of the QGP will be determined with an accuracy of about 20% by measuring thermal radiation with dielectron pairs (virtual photons). This measurement has not been possible in Run 2. The higher ALICE readout rate in Run 3 will enable a dedicated data-taking period with reduced magnetic field, which increases the acceptance for dielectrons, and the new Inner Tracking System will largely reduce the background from photon conversions and charm decays. The further upgrade of the inner tracker (ITS3) planned for Run 4 with largely reduced material thickness will further improve the accuracy to about 10%. 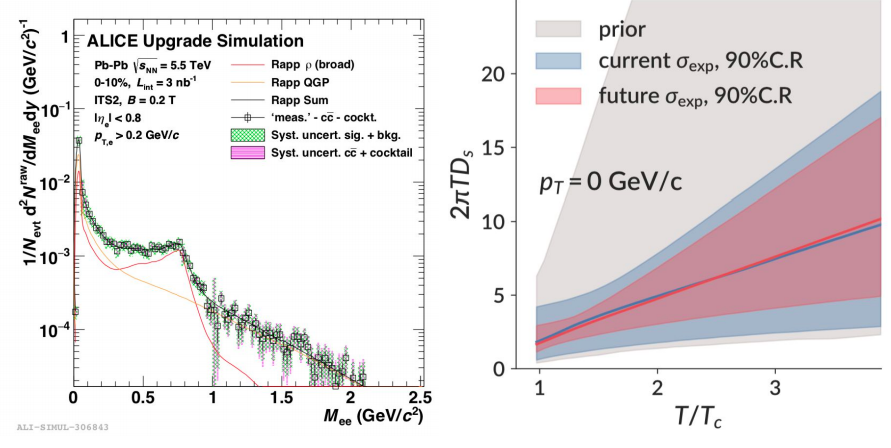 Figure 2: Characterising macroscopic properties of the QGP. Left: ALICE sensitivity to thermal radiation from the QGP (labelled ‘Rapp QGP’), using virtual photons (di-electron pairs); the slope of the radiation-dominated component at large mass estimates the temperature of the emitting source with an accuracy of about 20%. Right: Coefficient range (90% confidence region) for the charm quark diffusion coefficient as a function of the QGP temperature (current Run 2 and future Run 3+4 experimental constraints from combined ALICE and CMS measurements).

The nature of the effective constituents of QCD matter and its characteristic length scales can be studied experimentally with high precision, using high-statistics hard probes. Multi-differential jet, heavy flavour and quarkonium measurements are among the main avenues for these investigations. The microscopic dynamics of the QGP and of hadronization in general will also be studied using precise measurements of heavy-flavour meson and baryon production as well as of light nuclei and hyper-nuclei. For example, measurements of the production of charmonium and bottomonium states with different binding energies give access to a well-defined set of length scales for the study of the QCD force in a colour-deconfined medium via the characterisation of the mechanisms of melting and regeneration. With Run 3 and 4 data, ALICE will perform rapidity, transverse momentum and centrality-differential measurements of ψ(2S), Υ(1S) and Υ(2S) with uncertainties that will be much smaller than current model uncertainties. Figure 3 (left) shows as an example the projections for bottomonium production as a function of centrality. The projections are compared to two calculations that differ in the prescriptions for the above-mentioned production and regeneration mechanisms.

Another example is the search for the rare Molière scatterings in the QGP. The deflection angle in the QGP of an energetic quark projectile is expected to be gaussian if the QGP is strongly coupled at all scales. However, since QCD is asymptotically free, a power-law tail resulting from point-like scattering centres should emerge at sufficiently-large angles. An excess of large-angle deflections in Pb-Pb relative to pp would be the first confirmation that at sufficiently short distances, the QGP degrees of freedom are free quarks and gluons. The search for large angle scatterings can be performed by measuring the deflection angle distribution between recoiling jets and a trigger electroweak boson or hadron, at low jet and trigger object momenta. Figure 3 (right) shows the statistical precision of a few percent that will be achieved in Runs 3+4.

Figure 4: Developing a unified picture of QCD particle production from small (pp and pA) to large (AA) systems. Left: Ω/π ratio as a function multiplicity () in pp, p-Pb and Pb-Pb collisions. Both the existing data from Run 1 and 2 as well as the projection for Run 3 and 4. Right: Parton energy loss measured in Pb-Pb and p-Pb collisions and the projections for Run 3 and 4.

The discovery of collective patterns and strangeness enhancement in particle production in pp and p-Pb collisions with the LHC Run 1 and 2 data questions the view of nucleus-nucleus as the only colliding system in which a QGP can be formed. This question motivated the decision to pursue increased luminosity goals with pp and p-Pb collisions to carry out a programme of high-precision studies of rare probes at high multiplicity. The ten-fold increase of the sample of high-multiplicity pp collisions with respect to Run 2 will open the possibility to study several observables in small and large systems at the same multiplicity. The smooth increase of the strange-particle production across collision-system size (Figure 4, left) will be further studied with the goal to answer whether the thermal limit given by statistical hadronization in Pb-Pb collisions is reached in high-multiplicity pp collisions. The large integrated luminosity that will be accumulated will enable precise measurements of heavy-quark and quarkonium collective flow and a quantitative comparison between pp, p-Pb and Pb-Pb collisions to clarify the origin of the collectivity in small systems and the role of the initial-state of the collisions. The parton energy loss within the strongly interacting QGP is well quantified in Pb-Pb collisions, but so far only upper limits could be established in pp and p-Pb collisions (Figure 4, right). The analysis of hadron-jet correlations in Run 3 and 4 will allow ALICE to either observe for the first time the energy loss in small systems or to put a stringent limit two orders of magnitude smaller than the measured energy loss in central Pb-Pb collisions.

A major goal in this context is the study of the presently-uncovered small Bjorken-x region below 10-4 where parton phase-space saturation could set in, using charmonia produced in photon-lead collisions. In particular, the measurements of the J/ψ, ψ(2S) and Υ(1S) photoproduction at central and forward rapidity will allow ALICE to study the Q2-dependence of the nuclear shadowing in a wide range of Bjorken-x (Figure 5, left). For Run 4, ALICE is planning to install a dedicated high-granularity forward calorimeter (FoCal) to measure forward photon production in p-Pb collisions and thus to constrain the gluon densities in the Pb nucleus at very low Bjorken-x (>10-6) with unprecedented precision (Figure 5, right). These studies, besides their fundamental interest, are a crucial input for the understanding of the initial conditions of heavy-ion collisions.

Figure 5: Probing initial-state nuclear parton densities in a broad (x,Q^2) range. Left: Projections for gluon shadowing factor measured with heavy vector photoproduction in ultra-peripheral Pb-Pb collisions in Run 3 and 4. Right: The projected uncertainties of the gluon distribution in Pb nucleus obtained from the forward photon measurement in p-Pb collisions with the FoCal detector in Run 4.