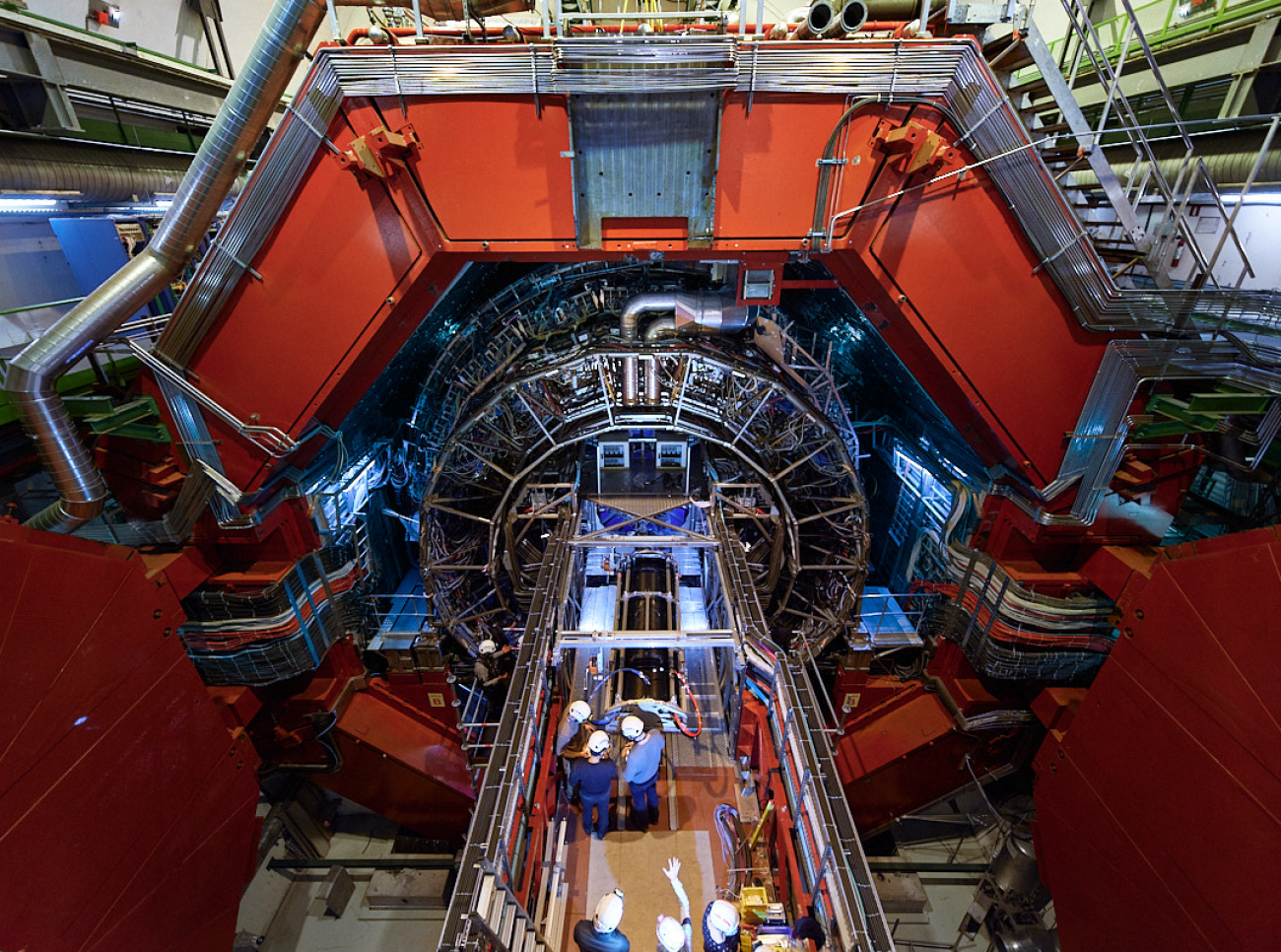 After three years of challenging and intense upgrade activities and installation campaigns of LHC Long Shutdown 2 [1], ALICE started global commissioning in July to embark on a new data-taking period. Upgraded detectors and their new readouts were integrated into the new data acquisition system called O2 (Online-Offline), where raw data continuously read out from detectors are reconstructed in several steps synchronously in the First Level Processors (FLP) and Event Processing Nodes (EPN) [2]. ALICE integrated all important workflows for synchronous processing in FLPs and EPNs such as the TPC online clustering and tracking in GPUs, ITS online tracking and matching to the TPC, MFT clustering and tracking, and online compression of raw TimeFrame data.

The workflows were extensively tested using cosmic data taking in September and October and their stability was verified with the large number of FLPs (~200) and EPNs (70-140). While ALICE was progressing with cosmic data taking and full chain of O2 readout validation, ITS and MFT detectors were commissioned with several calibrations (noise and threshold), which were essential to preserve online tracking capabilities with high efficiencies. Noise performance and noise rejection in the cluster finders were optimized in the TPC to preserve tracking and PID determination. Moreover, krypton calibration was executed in the TPC for studying pad-by-pad gain equalization and a laser system was commissioned to calibrate drift velocity.

In early October, a beam of 450 GeV protons made its way from the Super Proton Synchrotron (SPS) down the TI2 beamline towards Point 2, where it struck the TED beam dumper, located at a distance of 80 meters from the ALICE interaction point [3]. The resulting muon splashes allowed checking the performances of FIT, MFT and Muon Spectrometer (MCH and MID). 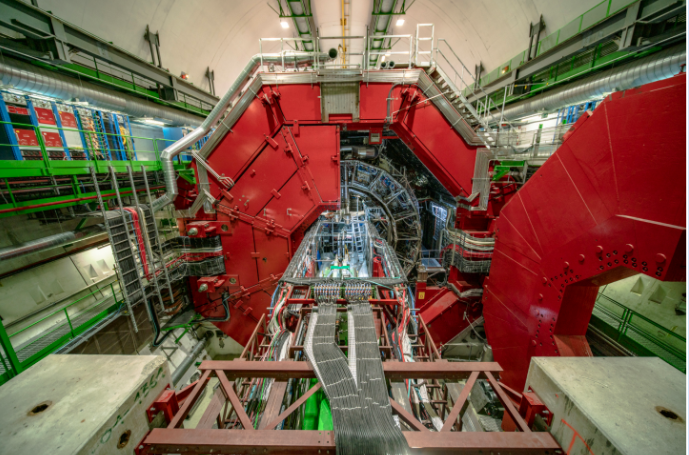 Figure 1. The massive doors of the ALICE experiment magnet, which had been open since the beginning of 2019 to allow for major detector upgrades. The delicate operation of closing them took place at the end of July 2021.

In October, pilot beams [4] were circulated in the LHC, as a part of the commissioning of the machine in preparation for Run 3, starting in May 2022. The pilot beam tests were extremely important to understand the responses of the upgraded detectors with collisions and the performance of the new O2 system as well as to advance the asynchronous reconstruction, global calibrations, and analysis framework. On the first day of Stable Beams, on 28 October, ALICE commissioned two luminometers (FT0 and FV0) and started providing reliable luminosity measurements to the LHC. After the quick offline data reconstruction, it was observed by FT0, ITS, and MFT detectors that the collision points were shifted to A-side by 40-60 cm with respect to the interaction point. This  was quickly confirmed by the scope measurements of B1 and B2 BPTX signals and by the CMS collaboration. Strange as it may sound, the observation of the shift was the first demonstration of the excellent performance of the ALICE tracking systems. The collision points were re-adjusted by the LHC on the following day. After rechecking the vertex position by ITS, FIT, MFT, and scope, ALICE went into the steady continuous data taking mode with all synchronous processing in FLP and EPN and data compression workflows. Figure 2 shows the ALICE event display from one time frame, which contains 128 orbits (11.5 msec) and ~6 collisions on average.  ITS and TPC matched tracks are shown in the central barrel, and MFT tracks are shown in the forward direction. It is to note that the TPC tracking is done online via GPUs in EPN. 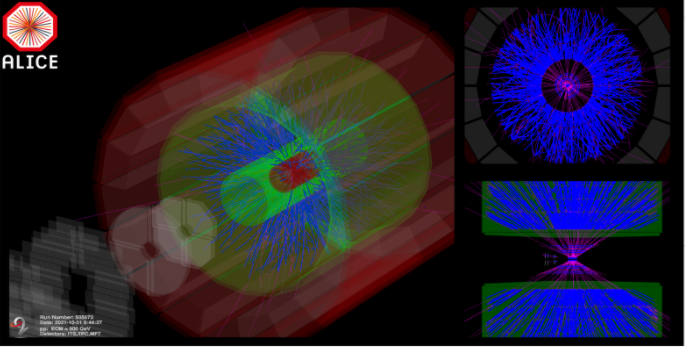 Figure 2.  ALICE event display from one time frame, which contains 128 orbits (11.5 msec) and ~6 collisions on average. 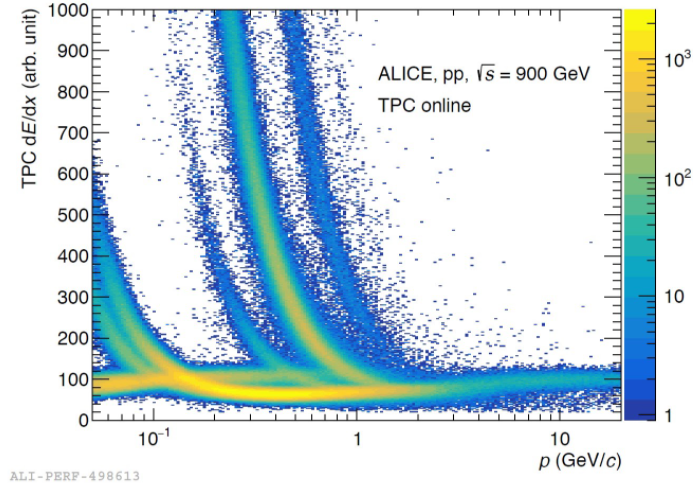 During the pilot run, ALICE took data with three different magnet settings for Solenoid and Dipole magnets in order to perform global alignment. In total, data taking runs lasted for ~28 hours, during which time ALICE accumulated sufficient statistics for making further studies. The pilot beam offered the opportunity to fully commision newly upgraded detectors and validated performances as expected. The online systems were validated with large numbers of FLPs and EPNs, which demonstrated stable data taking with all online processing for many hours continuously. ALICE collected about 60 million collisions and fed into asynchronous reconstruction for further deep analysis and development of calibration and analysis framework for Run 3.

The success of the LHC pilot beam tests marks a precious milestone for the ALICE collaboration, especially for those involved in the development of new concepts, built the detectors as well as our colleagues who dedicated countless hours in the ALICE control room (Figure 4) ensuring that detectors and new O2 systems are fully operational.

Fig.4 Detector and central system experts working in the ALICE Control Room during the 2021 pilot run.

ALICE will resume global commissioning activities in the beginning of January 2022 and start integrating new improvements in order to optimize for performance for the LHC restart. The early phase of 2022, especially, first stable beams, intensity ramp-up, and  pp physics will be extremely important to complete and validate all new components under the full swing of the LHC operations before recording the first high-intensity Pb-Pb collisions and start its Run3 physics program [5]

[2] CERN-LHCC-2015-006; ALICE-TDR-019, Technical Design Report for the Upgrade of the Online-Offline Computing System.

[4] The four LHC experiments are getting ready for pilot beams