Casting light on the dark sector of the universe 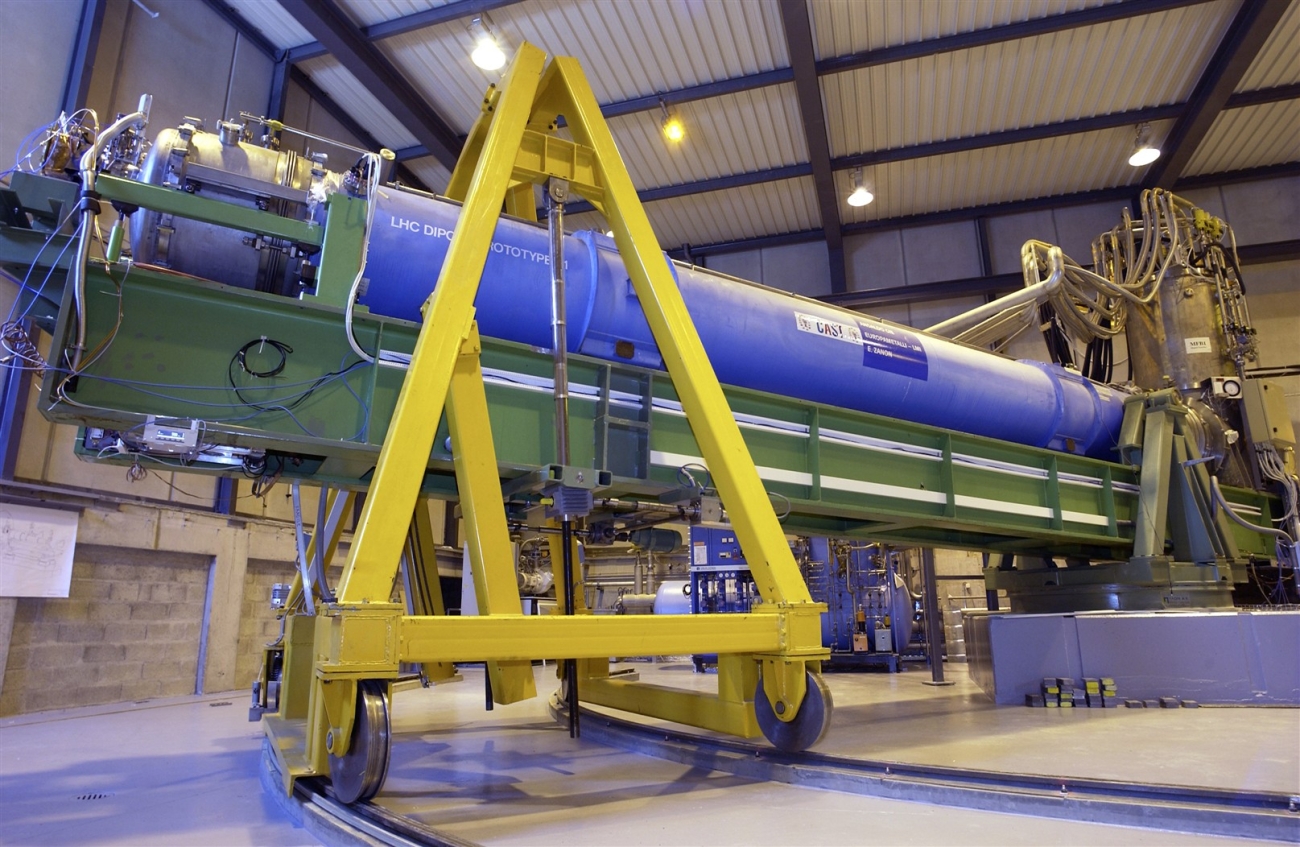 The cosmologically established cold dark matter (CDM) makes about 84% of the Universe's total mass. In the era of precision cosmology, the composition of the CDM remains a mystery. Among the proposed hypothetical particles which could address this fundamental question in physics, certainly, the QCD axion is among the best motivated candidates. A U(1) symmetry as introduced by Peccei and Quinn (PQ) solves the strong-CP problem in quantum chromodynamics (QCD), which is a fundamental question in nuclear physics. Its simplest manifestation is: why the electric dipole moment of the neutron is some 10 orders of magnitude smaller than predicted by the standard model in physics. Weinberg and Wilczek pointed out that the spontaneous breakdown of the U(1) symmetry results in a particle dubbed the Higgslet by Weinberg and axion by Wilczek, with the latter taking hold. The QCD axion is a pseudoscalar field as defined by its coupling to gluons being of fundamental importance also for the solution to the aforementioned strong CP Problem.

In big-bang cosmology, axions can appear before reheating begins and can be present during inflation, while the axion field may originate after the end of inflation. Measurements of the cosmic microwave background (CMB) properties constrain the parameter space of the axion. Interestingly, dense axion structures like axion miniclusters or even axion stars could exist and may be, on purpose or not, the targets in axion research.

Laboratory searches have developed concepts involving axion electrodynamics that provide promising detection concepts in laboratory axions or axion-like particle (ALPs) searches. The axion search by CAST, both the solar and the DM axions are based on the axion-to-photon coupling, an idea proposed by Pierre Sikivie in the early 1980s.

Besides the QCD axion, a new class of ALPs arise from various models, which introduce additional spontaneously broken symmetries including more underlying physics. The ALP masses might share a common origin with the QCD axion, but they do not necessarily follow a similar relationship between the axion rest mass and fa. Both axions and ALPs are potential DM candidates.

The axion’s rest mass lies probably in the sub-eV or even in the sub-meV range, thus the associated extremely feeble interactions with visible matter and with radiation make the direct axion detection highly challenging.

At temperatures below the QCD phase transition, the axion coupling generates a potential and a mass ma = 5.69 meV × (109 GeV/fa). Over cosmological time, the axion field relaxes towards the minimum of its potential at a point θa = 0, conserving parity (P) and time reversal (T), while the neutron EDM vanishes. Assuming a standard cosmology, the residual energy in the axion field that is consistent with the present density of CDM is associated with the axion rest mass in the range of ma ∼ (0.5−50) µeV. In this case, macroscopically, the local axion field can be described by a classical expectation value, θa ~ √ 2ρDM oscillating at a frequency ma/2π ∼ (0.1−10) GHz, with the local mean DM density being ρDM ≈ 0.45 GeV/cm3.

The direct signatures of QCD axion dark matter are nuclear effects, such as an oscillating neutron EDM. However, detecting the expected tiny signal poses an experimental challenge. A number of state-of-the-art proposals have addressed this important issue not only for the neutron but also for other hadrons like the proton and the deuteron. There is a plethora of potential detection avenues which involve nuclear magnetic resonance, spin precession measurements in specifically designed low energy storage rings as well as atomic and molecular spectroscopy including mechanical oscillations in piezoelectric materials. However, none of these powerful probes are sensitive at the GHz frequencies that are motivated by cosmological considerations (misalignment of axion dark matter). Axions arise also in string theory and in models with extra dimensions (dubbed Kaluza-Klein axions).

Axions generically couple to electromagnetism, with the relevant interaction strength given by the coupling constant axion-to-photon (gaγγ). The axion search by the CAST experiment at CERN, whether for solar or DM axions, is based mainly on this coupling mode (gaγγ) with the one photon (a virtual one) being provided by the magnetic field, which forces the axion-to-photon conversion to take place. Axions could be copiously produced in the stellar interiors, in particular in the Sun, via the Primakoff conversion of photons of the solar plasma. Other additional model-dependent channels may exist. The robust prediction of the solar axion flux at Earth offers an interesting detection opportunity that is exploited by axion helioscopes like CAST.

Axions, these hypothetical low-mass bosons, are produced in the Sun by Primakoff scattering on charged particles and converted back to X-rays by the same process in the B-field of an LHC test magnet used by the CAST experiment. The two straight conversion pipes have a cross-section of 14.5 cm2 each. The magnet can move by ±8° vertically and ±40° horizontally, enough to follow the Sun for about 1.5 h at dawn and dusk with each end of the magnet, where separate detection systems can search for axions at sunrise and sunset, respectively. The sunrise system is equipped with an X-ray telescope (XRT) to focus the signal on a small detector area, strongly increasing signal to noise. Thanks to an XRT specifically built for CAST and improved low-noise X-ray detectors, CAST has covered large part of the parameter space. Image from the CAST Collaboration. "New CAST limit on the axion–photon interaction". Nature Phys 13, 584–590 (2017). https://doi.org/10.1038/nphys4109

For solar axions with a kinetic energy in the keV range, the emerging real photon takes the axion’s energy and momentum, thus propagating exactly along the axion's incident direction. This property makes axion-telescopy attractive. In this process, the magnetic field acts as the catalyst that enables the aforementioned conversion to take place. DM axions convert similarly inside one or four cavities, either individually, or coherently when they are phase matched while being inserted inside the powerful CAST magnet bore with B ≈ 9 Tesla. CAST, among other equipment, has also recycled one of the LHC test dipole magnets, making possible more recently, the realization of the first axion/chameleon helioscope and axion haloscope for DM axion searches.

CAST as a solar axion helioscope could see back in time what happened at the Sun about 8 minutes earlier, while as axion haloscope, it could look back in cosmic time by about 13.7 Gyears, the period since the early universe. The direct detection and identification of the Dark Matter axion or any other candidate is one the  most important adventures in modern science. 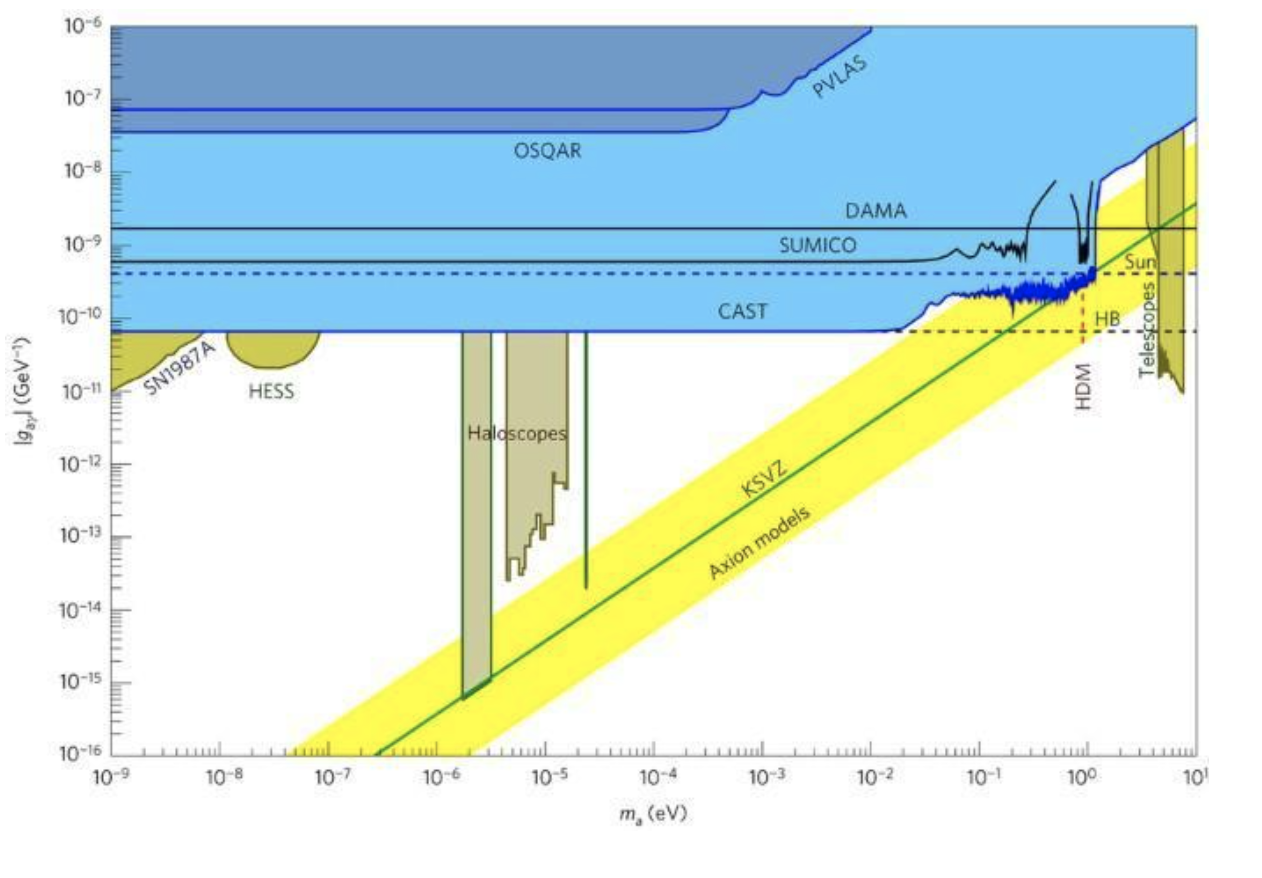 Certain cosmological and theoretical reasons which plead for the QCD inspired axion, explaining the world wide efforts to pin down the fascinating axion based on various detection concepts like: ABRA, ADMX, ALPS, AMELIE, ARIADNE, CAPP, CASPER, DALI, GNOME, GrAHal, HAYSTAC, IAXO, MADMAX, SHAFT, QUAX, and more being in the pipeline.

The initial CAST proposal was aiming to search only for solar axions for a period of only a few years, which finally became 22 years of data taking.

Because of the axion importance, most inspiring over the 2 decades of CAST data taking period remained the detection of the axion itself. Furthermore, a seamless detector R&D went in parallel to the CAST commissioning and data taking time intervals, from an early stage in the lifetime of the experiment. Ex post facto, the continuously better performing pixelized X-ray solid state detectors (CCD) or those of the Micromegas type, improved progressively the solar axion detection sensitivity, arriving finally to superior results than anticipated with the initial CAST proposal in 1999.

Referring to the detector performance, it was realized early on that an X-ray telescope, such as those widely used in X-ray astrophysics, would considerably improve the CAST solar axion detection sensitivity and its potential for signal identification. The performance of the X-ray lens could substantially improve the signal-to-noise ratio at the focal plane. This was among the first welcomed inspiring achievements for CAST.

As discussed, it is the axion-to-photon coupling that gives rise to the spontaneous two-photon decay of the axion, including the production of axions inside magnetic fields or the microscopic Coulomb electric fields near a nucleus or the plasma charges. Moreover, in the presence of an external magnetic field an oscillation from axion to photon and vice versa can take place and under certain experimental conditions this process occurs coherently and/or resonantly. This coherence would significantly enhance the axion signature in laboratory experiments like CAST, both for solar and DM axions alike (read previous EP newsletter article).  In 2019, CAST teams successfully completed the installation and commissioning of two varieties of cavities, the RADES and CAST-CAPP sub-detectors, one in each bore of the CAST dipole magnet making CAST the only experiment at CERN looking for the direct detection of dark matter axions.

It should be noted, that the same reasoning applies also in indirect astrophysical searches in stars with huge magnetic fields but also in interstellar or intergalactic space, in spite of their tiniest magnetic field strength, which is compensated by the huge field size. After all, what counts for the conversion probability axion-to-photon and vice versa depends primarily on the product magnetic field length times its strength squared (L•B)2. It should be noted that axions can be copiously produced inside the Sun's core via the coupling of thermal photons to axions with the catalyst being the microscopic nuclear Coulomb fields. Therefore, following the underlying idea by Pierre Sikivie from 1983 (see previous EP newsletter article HERE), CAST was tracking with its ~10-meter long LHC prototype magnet the Sun during sunrise and sunset for about 2×100 minutes per day.

An achievement, even in a particle physics laboratory like CERN, is not only a new particle discovery. Thus, even if CAST could not discover the highly anticipated axion, it has shown a number of physics results with a diverse impact for future axion searches. I would like to close this note by pointing to some of these results, reached over the years:

These results demonstrate CAST’s role as the most powerful axion helioscope ever built. After almost two decades of operation, CAST has put the strongest limits yet on the axion–photon coupling across a range of axion masses, surpassing previous astrophysical limits for the first time and probing relevant axion models of sub-electron-volt mass. The successful operation of CAST at CERN sets the ground for a continued search of axions. Building on CAST experience, IAXO is conceived as the new generation axion helioscope, aiming to explore the solar axion parameter space.