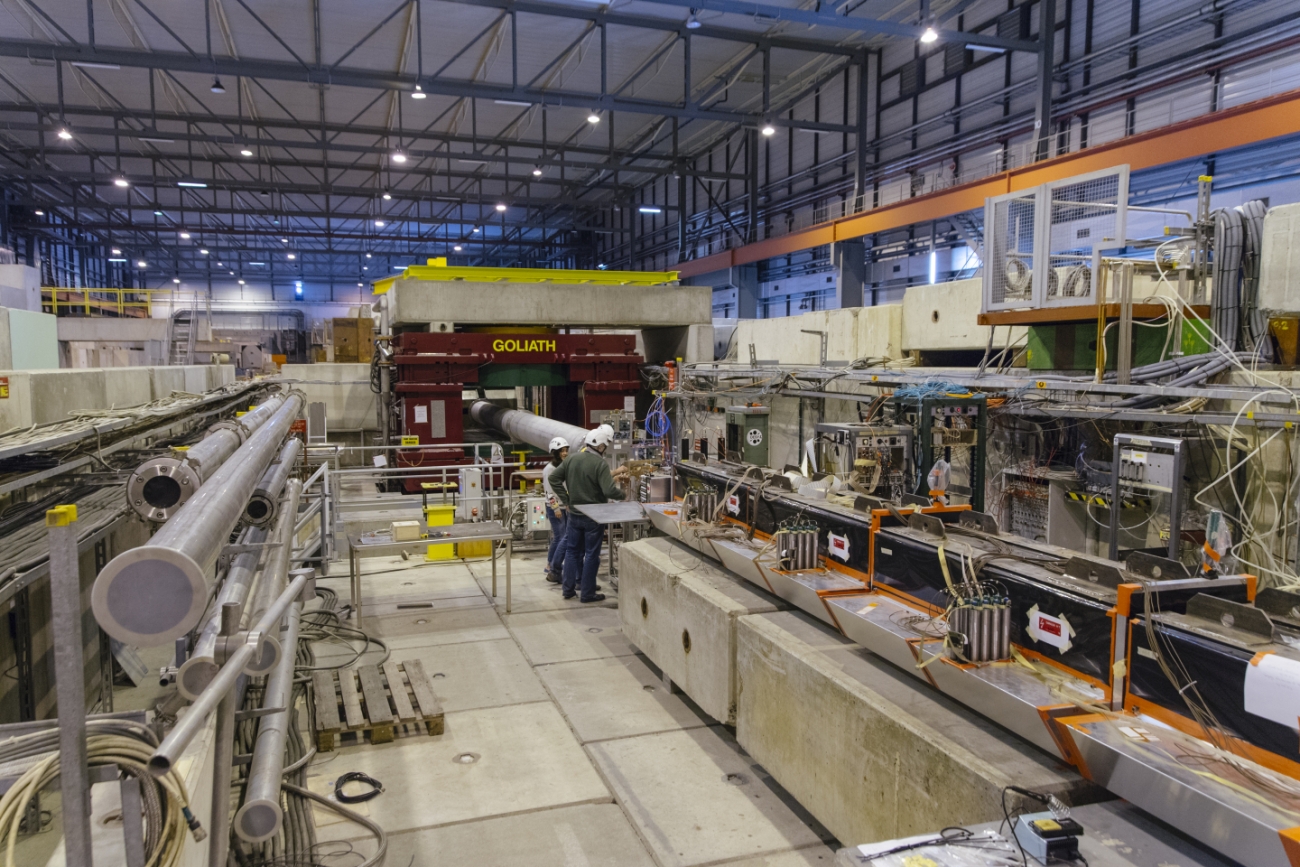 The axion was postulated to provide a solution to the "strong CP" problem. This pseudo-scalar particle emerges as a consequence of the breaking of the Peccei-Quinn (PQ) symmetry [1,2,3] (link to EP article on Axions). Typically, models of QCD axions predict a specific relation between coupling strength and axion mass (see solid line denoted as KSVZ axion in Fig. 1).

It is now believed that the generic axion has a mass much smaller than ma ∼ 100 keV, which was originally expected [4,5].  To be a viable dark matter candidate axions should have a mass below 60 meV which is right at the border of stellar energy loss exclusion bounds [6,7].

In this article, we focus on axion-like particles (ALPs), which are pseudo-Nambu-Goldstone bosons, arising in models containing a spontaneously broken PQ symmetry. In contrast to QCD axions, ALPs couplings strength and mass have no relation and can thus vary independently over many orders of magnitude as shown in Fig.1. In general ALPs can couple to fermions, gluons the electroweak gauge, and Higgs bosons, either independently, to a combination, or all of the above. Here we focus on their coupling to photons. ALPs with masses below the MeV scale are strongly constrained by astrophysical bounds: Big Bang Nucleosynthesis, Cosmic Microwave Background radiation, and from cooling rates of stars.

On the other hand, heavier ALPs in the MeV-GeV range are very attractive candidates as mediators of interactions between dark and visible sectors or as candidate for dark matter (DM) themselves. They can reproduce the observed DM relic abundance from thermal freeze-out. They evade limits from direct detection experiments since the predicted event rates are strongly suppressed at tree level. ALPs could also provide a solution to both the electron and muon (g-2) tensions [8]. This has motivated worldwide theoretical and experimental efforts towards dark forces and other portals between the visible and dark sectors (FIPs-2020 workshop at CERN). 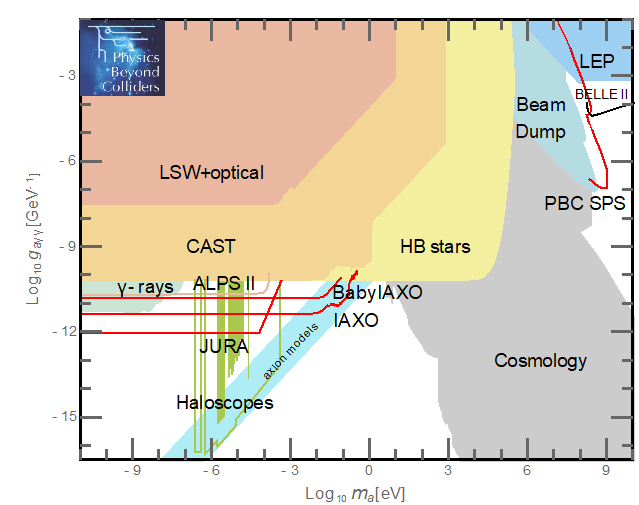 Fig.1: Current bounds and projected sensitivities on a generic ALP with mass ma and coupling to photons gaγγ from [6].

At colliders different processes can be responsible for ALPs production, some examples at LEP and LHC are depicted in Fig.2. At LEP and BELLE II in the future, one can either search for a mono-photon when the ALPs decay outside of the detector or look for the two photons when the ALPs decay inside the calorimeter. For ALPs masses below 20 MeV, it becomes challenging to separate the two electromagnetic showers, and therefore this approach is not very sensitive in the low mass range. However, this is very powerful for higher masses.

LEP put the most stringent limits for a coupling ga𝛾𝛾 above few 10-3 in the mass range from 20 MeV to 1 GeV as shown in Fig.1.

Fig 2: Left: Production of ALPs at e+e- colliders. At LEP searches focused at the Z0 pole while at BELLE II the production will occur via virtual annihilation photon coupling to the ALPs. The signature is either a monophoton search for ALPs decaying outside the detector or a search for 3 photons final states if this occurred inside. Right: example of production of ALPs at LHC.

Ιn fixed target experiments, ALPs coupling to photons can be produced via the Primakoff effect by interactions of Bremsstrahlung photons generated by the incoming beam with virtual photons provided by the nuclei of the dump (see Fig.3).

Fig.3 Example of production of ALPs in an electron beam dump experiment. The high energy (100 GeV) electrons impinging on the dump emit Bremsstrahlung photons which interacting in the field of a nucleus produces via Primakoff effect an ALP.

However, for coupling strength lying in the range  10-2 ≲ ga𝛾𝛾 ≲ 10-4 GeV-1 traditional beam dump experiments are not very sensitive because for the masses in the sub-GeV/c2 region the ALPs will be a relatively short-lived particle.

NA64 performed a direct search for  ALPs  with the coupling to two photons from the (ma; ga𝛾𝛾)-parameter space uncovered by previous searches. The hard bremsstrahlung photons are generated by 100 GeV electrons delivered by H4 at the CERN SPS impinging on an ECAL acting as an active beam dump.

The ALPs produced via Primakoff effect would penetrate the downstream HCAL module,  serving  as a shield,  and would be observed either through their a→𝛾𝛾 decay in the rest of the HCAL detector, or as events with large missing energy if the a decays downstream of the HCAL (see Fig.4). 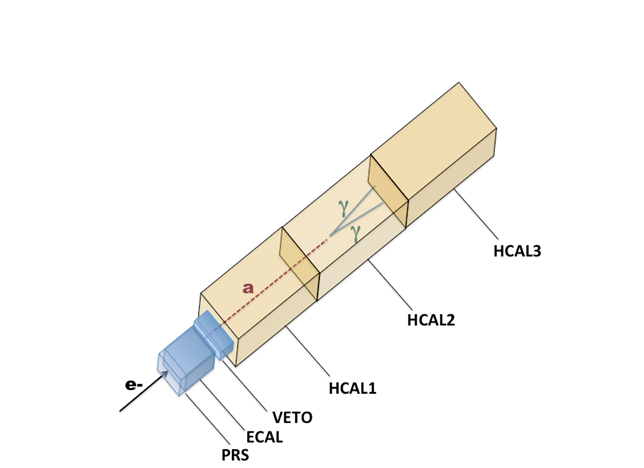 Fig.4: Schematic view of the setup to search for the a→𝛾𝛾 decays of the a's produced in the reaction chain e-Z → e-Z𝛾 ; 𝛾 Z→ a Z induced by  100 GeV's in the active electromagnetic calorimeter (ECAL) dump (where Z denotes the nuclei of target material) and subsequent decay in the hadronic calorimeter (HCAL) 2 module.

This method allows probing of the ALPs parameter space, including those from generic axion models, inaccessible to previous experiments. No evidence of such processes has been found from the analysis of the data corresponding to 2.84x1011 electrons on target allowing to set new limits in the (ma; ga𝛾𝛾)-plane at 90 % C.L. as shown in Fig.5 together with the results of other experiments. Those limits are valid for both scalar and pseudoscalar cases and exclude the region in the coupling range 2x10-4 ≲ ga𝛾𝛾 ≤ 5 x 10-2 GeV-1 for masses ma ≲ 55 MeV. More details can be found in the recent publication in Phys. Rev. Lett. 125, 081801 published on the 17th of August 2020 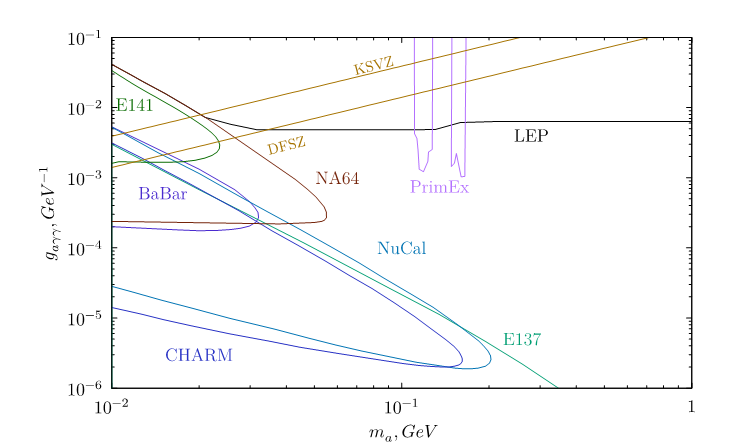 Fig.5: The NA64 90% C.L. exclusion region for ALPs coupling predominantly to photons in the (ma; ga𝛾𝛾)- plane as a function of the (pseudo)scalar mass ma derived from the present analysis.  The yellow band represents the parameter space for the benchmark DFSZ [4] and KSVZ [5] models extended with a broader range of E/N values [9,10].

This search in NA64 is expected to be background free up to 5x1012 EOT which is the goal of the experiment before LS3 in order to probe most of the remaining parameter space predicted by the DM relic density (see NA64 EP newsletter 2019 for more details).

The projected sensitivity is shown in Fig.6. Future experiments such as FASER, NA62 in beam dump mode and Belle II will complement NA64 in the exploration of the remaining parameter space allowed for ALPs in this mass range. 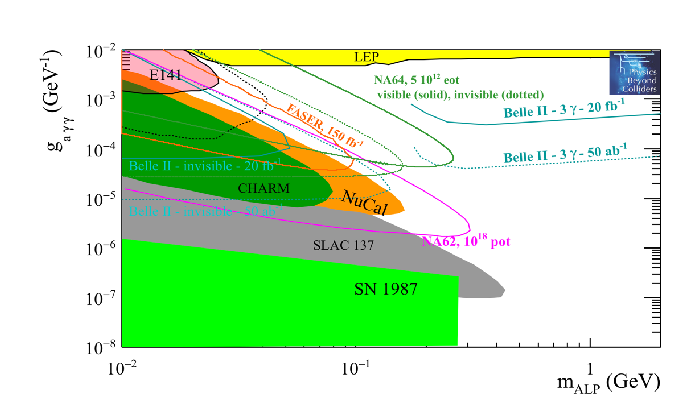 ALPs could also provide an explanation of the recent excess observed by the KOTO Collaboration searching for rare K0L → π0𝝂𝝂 neutral kaon decay [11]. KOTO reported the observation of 4 events in the signal region with a measured branching ratio significantly larger than that predicted by the SM. One possible explanation of this excess is the existence of a new K0L → π0S decay, where S is presumably a new scalar dominantly coupled to photons with a mass in the ≲ 250 MeV range.

The implication of the NA64 results presented above is straightforward, as they are also applicable  for the search for S →𝛾𝛾 decay. The preliminary NA64 analysis reported recently at the FIPs-2020 workshop at CERN allows the exclusion of part of the S parameter space with the prospect to significantly improve the sensitivity of the search running after LS2 (see Fig.7 adapted from Ref.[12]). Moreover, the developed technique will potentially allow NA64 to probe the ALP(S) masses around the  π0 mass which is difficult to probe in rare kaon decay experiments due to irreducible background from  K → π π0  decays.

In summary, exciting times for ALPs searches are ahead in the next 5 years, so stay tuned! 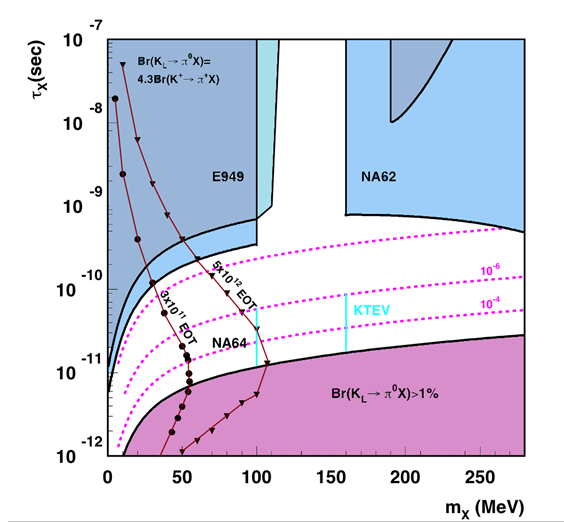