LHCb in the hunt of tetraquarks 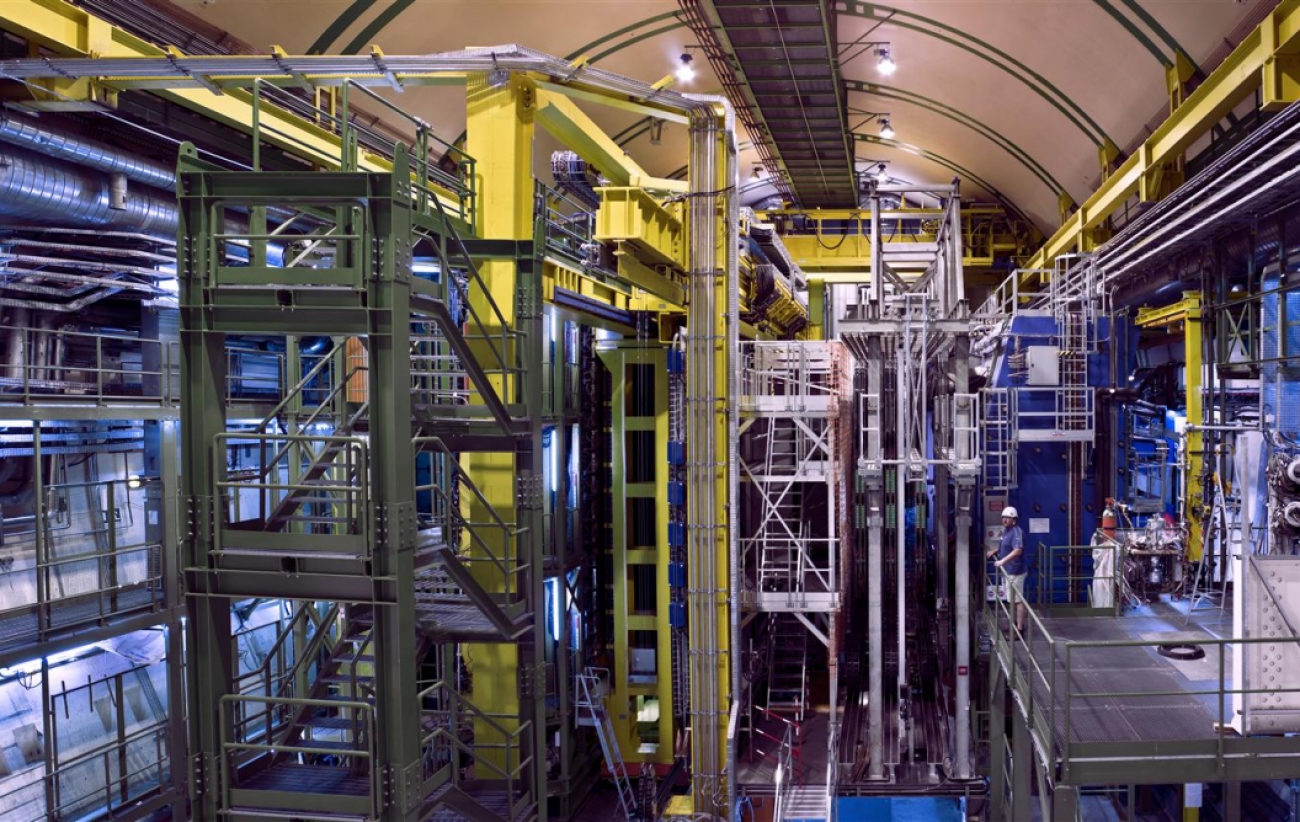 In 2003, the Belle collaboration reported the observation of an unexpected new particle, showing up in the mass spectrum of J/ψ π π candidated. Its mass was somewhat close to the value expected for the yet unobserved χc1(2P) charmonium, but its width was extremely narrow and completely dominated by the experimental resolution. This particle, called X(3872), was the first of many others observed in the past 17 years; they are mostly found in the mass range of the charmonium excitation spectrum, but they are incompatible with being excited charmonia (i.e. a ccbar bound state) because of a series of properties (mass, width, decay rate, JPC, electric charge, a.o). For this reason, they are commonly referred to as “exotic particles”.

Several models have been developed in order to explain the nature of these particles, and they all imply a multiquark internal structure. We call the meson-like states “tetraquarks” and the baryon-like states “pentaquarks”, as a reference to the minimal number of quarks that must compose their internal structure. The two most promising are the compact multiquark model and the molecular model, and they differ by the mechanism that binds the quark together into a single, composite state: in the first, all quarks are organised into colour-charged groups by strong interactions and these, in turn, are connected to form a colour-neutral state; in the second, quarks are organised into hadrons bound by light mesons exchange. These two different models have different macroscopic implications which can be tested (production cross-section, quantum numbers, specific decay channels, etc.). Until now, there has been no definitive evidence that any of the exotic particles is well described by a specific model while rejecting all the others.

All exotic particles that have been discovered up to June are quite similar: they are composed of a charm-anticharm pair and two –or three, for the pentaquarks– light quarks. This is indeed the optimal configuration to work with in particle colliders: the large mass difference between different states and the presence of charmonia in the final state – especially the J/ψ - create a very clean environment which would be impossible to have in case of entirely light quarks.

The LHCb detector has proved to be an extremely useful machine for studying the spectroscopy of exotic states: the measurement of the quantum numbers of the X(3872), the observation of many new exotic particles – amongst which the first pentaquarks - and many more. And recently, the LHCb collaboration has reported the discovery of two new, very interesting and unique tetraquark candidates. The first study, not yet published but available on the arXiv, shows the observation of a structure in the invariant mass of J/ψ pairs. The observation has been made possible by two main factors: its mass, 6900 MeV/c2, lies between, but relatively far away from, the charmonia spectrum and the bottomonia spectrum, where no other conventional peaking contribution is expected; the observation channel, 4 muons coming from two J/ψs, exploits the exceptional tracking performances of the LHCb spectrometer.

This new exotic particle, dubbed X(6900), is quite interesting because in order to decay into a J/ψ pair, it must be composed by a charm-anticharm pair: it is the first observed tetraquark composed not only entirely of heavy quarks, but also of quarks of the same flavour. The mass of a molecule is less than the sum of the masses of its components, because of the negative binding energy; due to its mass, which is much higher that the sum of two J/ψs, the X(6900) seems to be most consistent with being a compact tetraquark; in any case, it provides a unique environment to study the strong interactions and the quarks confinement mechanism. 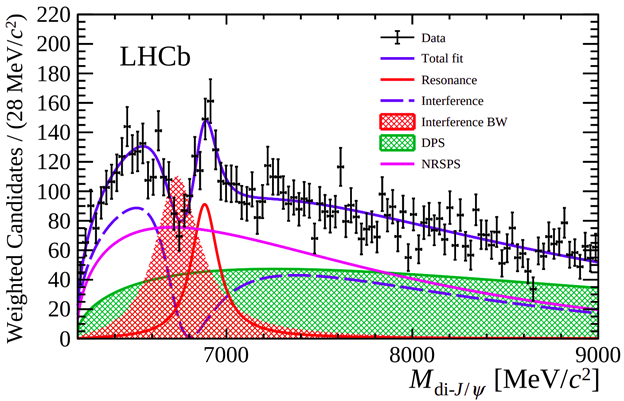 The second study, presented at a CERN seminar on August 11th, reports the observation of an unexpected structure in the DK invariant mass from the analysis of B→DDK decays, at around 2900 MeV/c2. By performing both a model-independent Legendre expansion analysis and an amplitude fit to the data, it is clear that all known contributions from charmonia decaying into D+D- cannot reasonably explain the shape of the D-K+ invariant mass distribution; instead, a good agreement is achieved by including two new resonances, one with spin 0 and the other with spin 1, with similar mass around 2900 MeV/c2. If confirmed, this would be the first observation of “open-charm” tetraquarks made of a single heavy charm quark and three light quarks (s, u, d).

To conclude, the field of exotic spectroscopy is extremely rich, active and productive, with about 30 new particles discovered in the past 17 years and even new configurations in the recent years, two of which just in the past 4 months. But this is just the tip of the iceberg – we know that there are still many still unobserved exotic particles ready to be discovered, and furthermore we do not have yet a conclusive description of their internal structure and binding mechanism. LHCb has established itself to be a major player of this field, and new, exciting discoveries will surely follow in the next years.