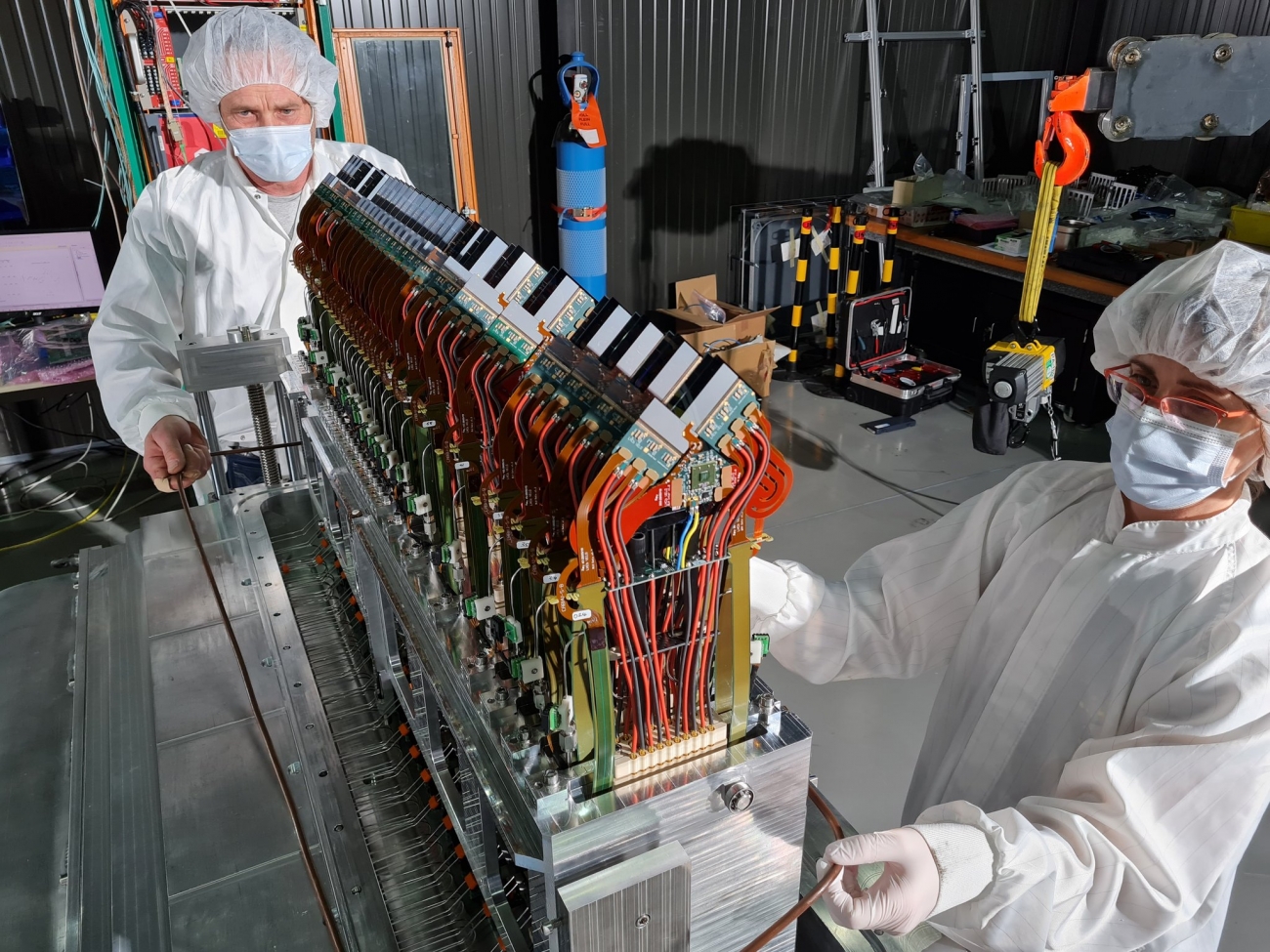 As the LHC marks the start of the final countdown to Run 3, the LHCb experiment is preparing to commission its new detector. The upgrade will allow the collaboration to pursue its physics programme into the High Luminosity era. LHCb aims to fully exploit a 5-fold increase of luminosity and collect approximately 50 fb-1 of data by 2028. Central to maximizing its sensitivity to new physics is an entirely new trigger capability that requires real-time particle identification, tracking and vertexing for every proton-proton collision taking place.

As the clock ticks down towards the LHCb cavern closure the collaboration anxiously awaits the installation of the complex and delicate vertex locator (VELO). To deliver on its promise, the VELO must operate in few mm from the proton-proton interaction point whilst recording hits on tracks with almost micron level precision. The VELO is designed to be retracted during injection and then precisely returned to its position, surrounding the interaction point, for operation.

The redesigned VELO is an almost brutally extravagant showcase of CERN’s, and its collaborating institutes, technology.  Nikhef and CERN have equipped the VELO with gossamer foils. These allow the two halves of the VELO to overlap and yet isolate the detector volumes from the LHC primary vacuum and from beam induced RF fields. The detector is equipped with 26 planes of hybrid pixels, bump bonded to the CERN/Nikhef Velopix chip. Last, but not least, to cool the detector modules to -30°C and minimize mass, CERN and Oxford have researched and built thin Si microchannel plates containing bi-phase CO2 at 15 bar (See [1] for more detail) and an information super highway has been installed by the University de Santiago de Compostela, Moscow State University, and University of Glasgow teams to ensure the signals can make the jump from vacuum to atmosphere and the 300 m journey to the data center, at speeds of several Terabits per second.

Key components of the VELO have already been installed or refurbished and upgraded: CO2 cooling plant, electronics, the data links from the vacuum vessel to the control room, foils, and the motion and vacuum systems. A major milestone was passed when module production began in November 2021 by the production centres at the University of Manchester and Nikhef. The detector modules were sent to Liverpool for assembly onto their mechanical supports, and cooling pneumatics. Mounting and connection to their service umbilicals is performed at the Liverpool Semiconductor Detector Centre (LSDC). There, the detector halves are fully tested for functionality, safety and pre-commissioned for installation at LHCb. The collaboration provides vital support at the assembly site and, where necessary, remote expertise and troubleshooting. 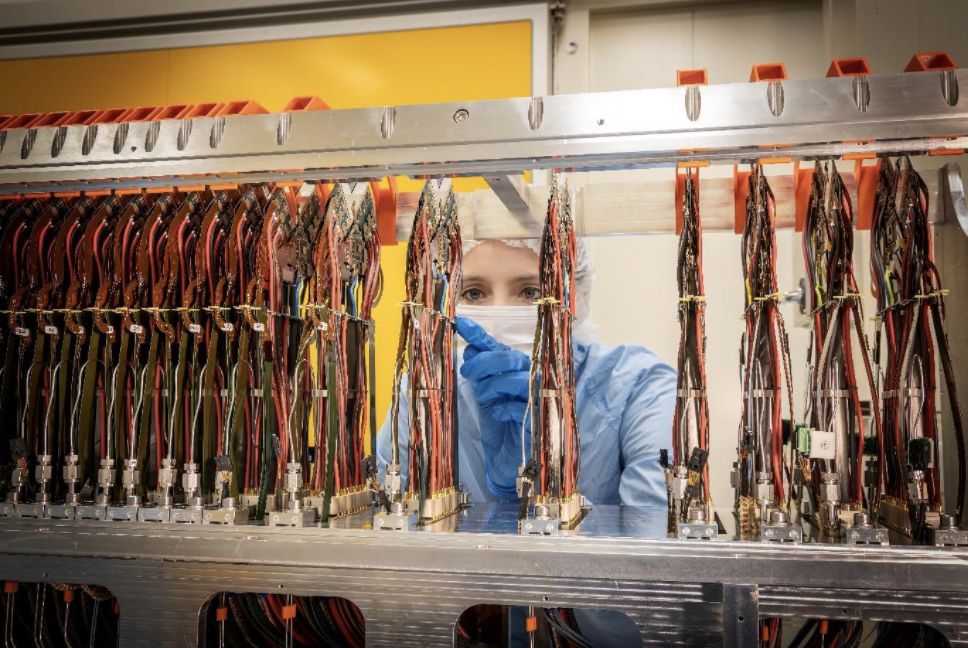 The VELO modules being assembled into the their final positions. Credit McCoy-Wynne, Copyright University of Liverpool.

Of course, once assembly is complete, each 0.5 tonne detector must be carefully transported to CERN. Using technology employed for satellite transport, a temperature-controlled truck is used to move the detectors the 1350 km distance by road. The monitored detectors are isolated from all but the smallest shocks and tilts by custom transport frames. 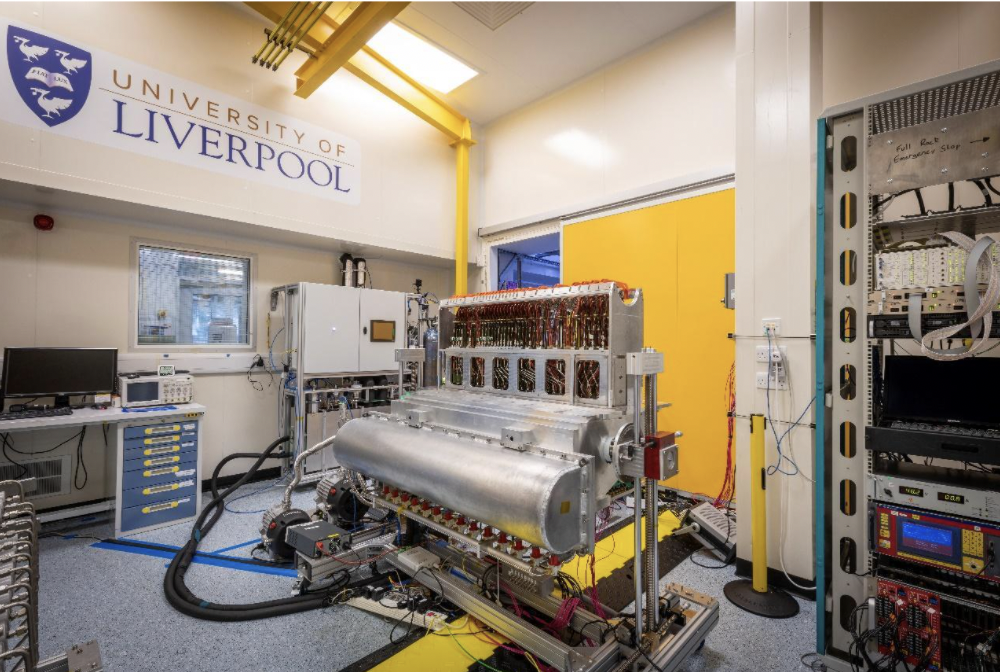 The fully assembled VELO C-side prior to shipping from the LSDC (Liverpool) to CERN. Credit McCoy-Wynne, Copyright University of Liverpool. 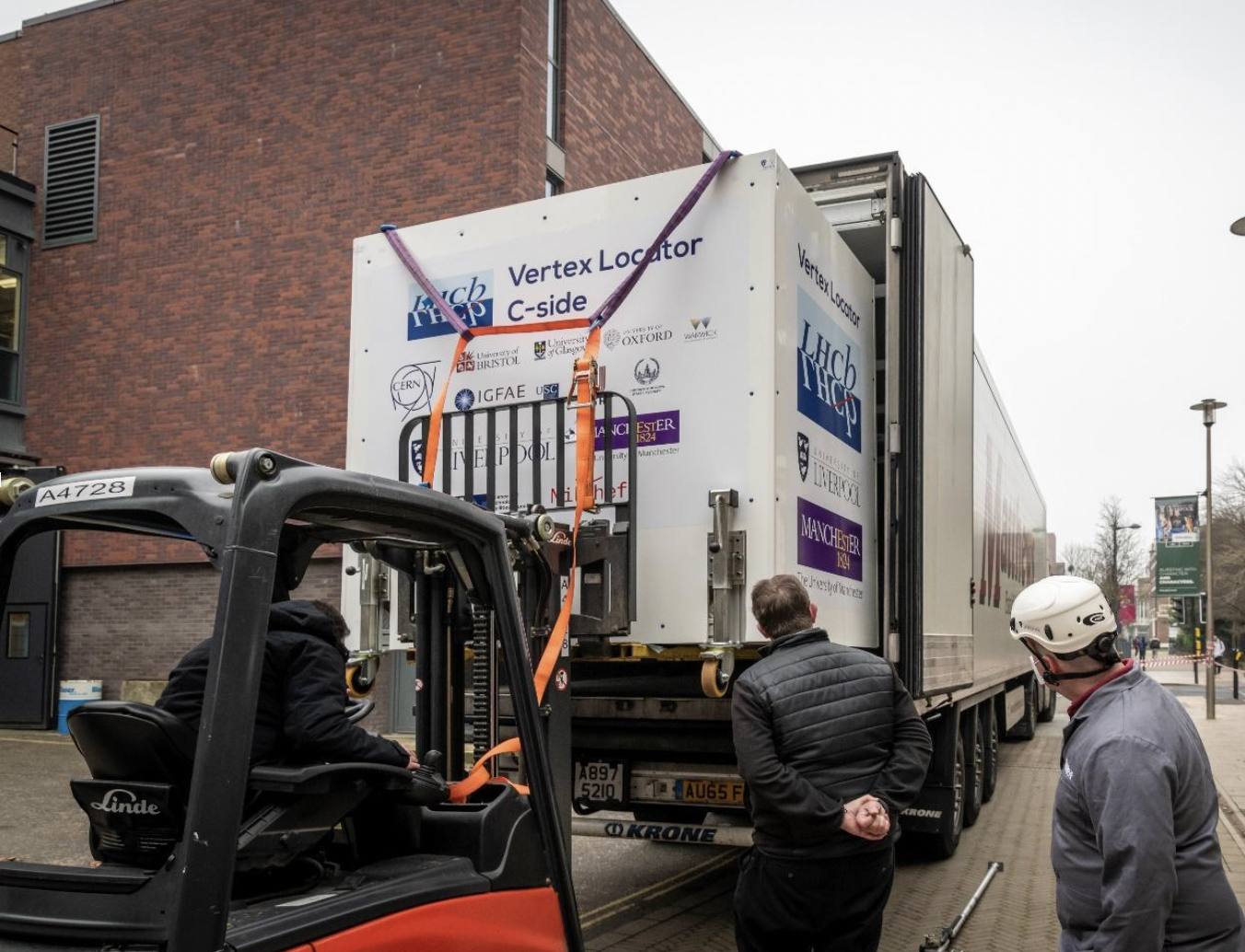 Final stages of loading of the C-side at Liverpool. Credit McCoy-Wynne, Copyright University of Liverpool.

The collaboration collectively sighed a breath of relief as the first VELO half (the C-side) was delivered to CERN at the end of January 2022. Following inspection, electronic testing to ensure functionality, and state of the art laser metrology, the C-side was installed on the 1st of March. 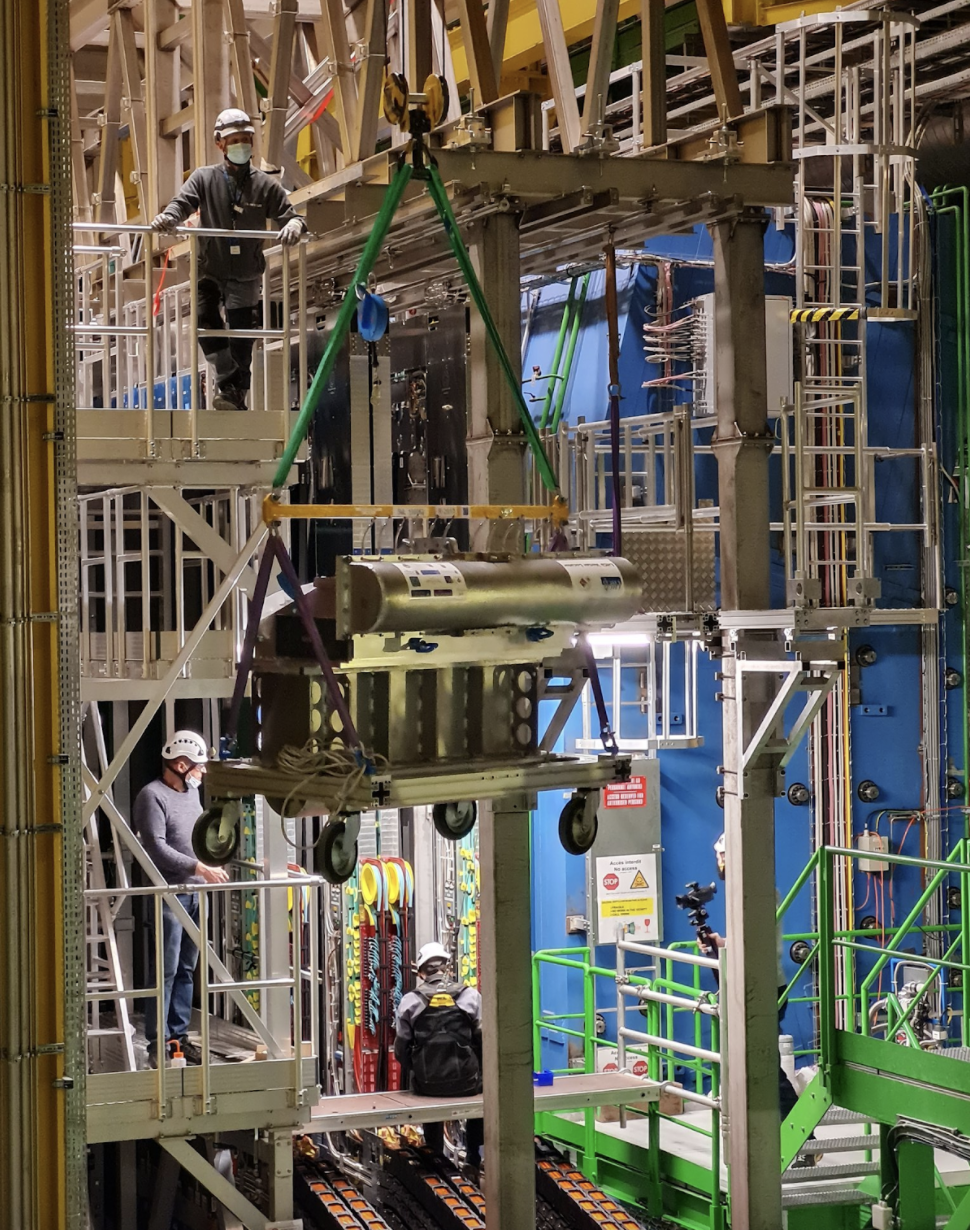 “One down, one to go” is now the thought on the VELO teams mind as the spotlight turns to the completion, and delivery, of the second (A-side) half.

With each passing day being one day closer to cavern closure, the project team, led by Paula Collins from CERN, is now undertaking the exacting task of ensuring the A-side is delivered to the same standard as the C-side. “We can take no shortcuts and will not sacrifice safety nor the huge existing investment in this detector”, she says and “loss of quality is not an option”. For the final phases of module installation and qualification at the LSDC the UK based teams will be joined by the CERN experts.

The installation of a VELO detector half may seem as a quick operation but it requires an extensive preparation effort. The detector base, cooling capillaries, cables and modules are described in great detail in CAD and matched to the secondary vacuum volume design. In particular, the real-life placement of the sensors and RF-foil undergoes a very precise metrology, so the parts agree within the tolerance of a few hundreds of microns.
All modules were electrically tested and with a satisfactory outcome, the detector base is declared ready to install. As the detector material is minimised in the experiment acceptance, the detector needs to be  balanced prior to transport and the procedure to rotate from the transport to the installation position is prepared and rehearsed at the surface. Now comes the intricate transport phase from surface to  the experiment cavern passing through above the LHCb's magnet and tracking system to the VELO alcove. The final steps of the installation involve a small set of experts from Nikhef, CERN and Liverpool, who meticulously operate in the limited amount of space, while they remain attentive to not contaminate the vacuum volumes. A supporting rail is mounted at the side of the opened vacuum tank and  finally the detector is lifted from the protection hood and rotated to its operational  position. The detector is inserted, guided by slits placed in the vacuum tank which match dowel pins on the base. Since the detector is retractable the motion system is reconnected and the volume closed. This leads to the next phase for the installation, which is immediately started by several scientists from USC, CERN, UoM, eagerly waiting to connect readout boards and long distance cables. To prevent a direct contact between sensors and RF-foil a set of removable shims was designed and implemented, such that they can be extracted once the distances from the foil to sensors are known using particles from the collisions. 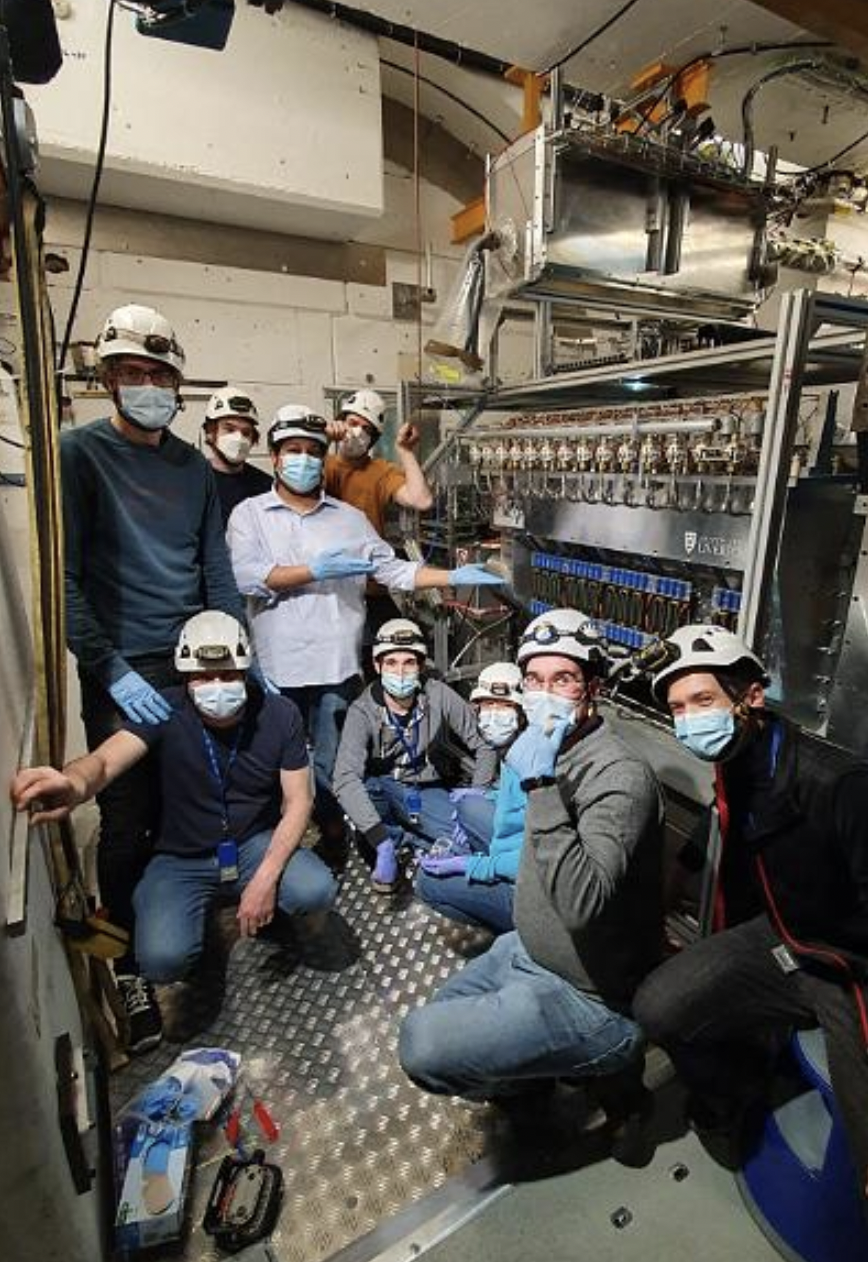