The LHCb detector provides unique precision coverage of the forward region at the LHC, enabling world-leading studies of flavour physics and more. The collaboration is currently installing the first major upgrade of the detector. This upgrade will allow proton collisions with an instantaneous luminosity of 2 x 1033 cm-2s-1, an increase by about a factor 5 on LHC Run 2. This upgrade will enable LHCb to reach a total recorded luminosity of 50 fb-1 by the end of Run 4 – a significant increase on the 9 fb-1 collected in Runs 1 and 2 combined. This increase in luminosity, paired with significant improvements to the LHCb trigger strategy, will enable significant increases in data volume:  datasets in many key analyses will increase by nearly a factor five by the end of Run 3. In this article we set out the achievements of the experiment, its ongoing upgrade, and what to expect in the coming years.

Since LHC data taking began in 2009, the LHCb detector has uncovered a host of interesting and exciting physics results, including the first observation of CP violation in charged B meson and Bs meson decays, the first observation of CP violation in charm meson decays, and the first observation of charm mixing at a single experiment. The experiment also discovered the Bs → μμ decay (first in a joint study with CMS, with confirmation then following using LHCb data alone). The discovery of new particles has also been a huge success for LHCb: of 59 new hadrons discovered at the LHC to date, 52 have been found using LHCb — including new exotic states of matter such as pentaquarks and tetraquarks.

Measurements of CP violation have traditionally been a key focus for the LHCb collaboration. Major advances have been made in the measurement of the angle 𝛾 in the unitary triangle; this angle was determined from direct measurements with a precision of 30° in 2009 but the combination of LHCb results now gives 67±4° (see Fig. 1). LHCb has also probed the CP violating phase φs to a precision of about 0.03 radians. Furthermore, measurements of |Vub | / |Vcb| at LHCb have confirmed tensions between determinations of these parameters that use inclusive and exclusive approaches. In addition, LHCb has made the world’s best measurement of CP asymmetries in both B0d mixing and B0s mixing, probing potential new physics contributions: the parameters adsl and assl have both been determined at a precision of about 3 per mille. The collaboration has also studied CP violation associated with the mixing of charm mesons or the interference between mixing and decay, determining ΑΓ with a precision of about 0.02%.

Figure 1: Precision achieved from combining LHCb measurements sensitive to the angle γ. This plot shows the sensitivity from studies of different B mesons. [from: LHCb-CONF-2020-003] 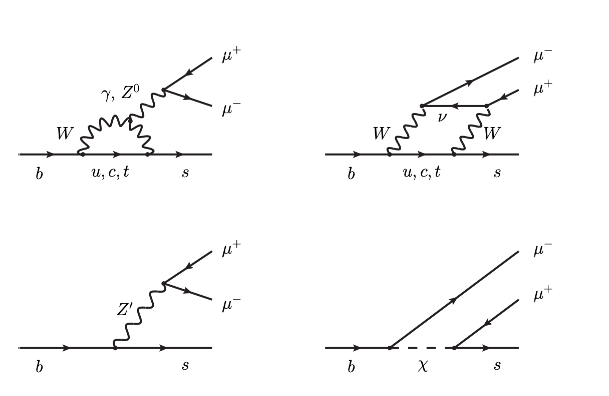 The forward nature of the LHCb detector means that it covers a complementary phase space to other detectors at the LHC. This has therefore allowed the collaboration to also make important contributions beyond flavour physics, such as precision measurements of W and Z boson physics, providing important tests of both QCD and electroweak theory. In addition, the experiment has set the world’s most stringent limits on dark photons for large regions of the available parameter space.

With so many crucial measurements still statistically limited, an upgraded LHCb has much to offer. Design choices for this upgrade were driven by three main concerns. First, with a higher pileup environment, higher detector granularity is necessary to maintain excellent performance. Second, the radiation fluence through the upgraded detector over its lifetime will be up to ten times larger than that experienced by the original detector: improved radiation hardness is essential. Finally, the experiment has embraced a new data acquisition philosophy (see Fig. 3): LHCb will operate without a hardware trigger, with the full detector readout for every event (at 30 MHz, compared to 1 MHz in previous LHC runs). This will enable the use of a software trigger alone, providing significant increases in trigger efficiencies for key channels - for example, fully hadronic B hadron decays will be triggered with roughly twice the efficiency achieved in Runs 1 and 2. Ensuring readout functionality at such high rates is therefore a key consideration when upgrading detector systems.

Figure 3: The Data Processing Framework at LHCb in the upgrade era [from LHCb-FIGURE-2020-016]

The detector tracking systems are undergoing a significant upgrade. The upgraded “Vertex Locator” - with active silicon as close to the proton beams as 5.1 mm — will now make use of pixel technology (as opposed to the silicon strips used in LHC Run 1 and Run 2). After full irradiation this upgrade detector is designed to still achieve hit efficiencies greater than 99%. In addition, new tracking detectors are being installed throughout the detector: the new UT (Upstream Tracker) and SciFi (Scintillating Fibre) Tracker detectors are located either side of the experiment’s dipole magnet, allowing precision measurements of charged particle momenta.

The experiment’s particle identification systems are also being upgraded. The two RICH (Ring Imaging Cherenkov) detectors, used to identify different hadron species, will make use of new photon detectors to achieve 40 MHz readout, which will also improve the resolution of photon emission angle by 20-50%. The RICH1 design has also been modified, and will achieve 30% lower peak occupancies, with a 30% higher photon yield and a 50% lower emission-point error. The calorimetry and muon identification systems will both also benefit from new readout technology, with the muon system also benefiting from increased shielding to reduce punchthrough and fakes.

The installation of this upgrade has – understandably – encountered delays due to Covid-19. However, the collaboration is making good progress on production and installation of the new detector elements and systems, and remains excited by the prospect of new data from Run 3.

The LHCb collaboration has also redesigned its structures to meet the challenges of the upgrade era. The organisation now features a “Real Time Analysis” project, bringing together detector and particle reconstruction experts and data analysts. This group plays a crucial role within the experiment, enabling data analysis previously performed ‘offline’ to be carried out within the LHCb software trigger. This approach builds on the successful data analysis model first developed at LHCb in LHC Run 2. In addition, the collaboration has formed a new “Early Measurements Taskforce” to ensure speedy and successful exploitation of the data collected, building on the collaboration’s experience with a similar group in LHC Run 2. This new group will use the first proton collision data to perform a series of measurements, determining cross-sections, relative decay times, masses of hadronic states, and branching fractions. These results will be compared to higher precision studies, probing the detector performance as Run 3 commences — a key step in validating the LHCb upgrade performance. In addition, the collaboration plans to analyse data recorded in a fixed target configuration. In this “SMOG2” mode, gas is injected into the collision point, with the proton-gas collisions recorded and analysed. This system is also undergoing a significant upgrade, increasing the effective target density by two orders of magnitude. As well as enabling exciting studies of physics, this data will allow better understanding of the new detector. 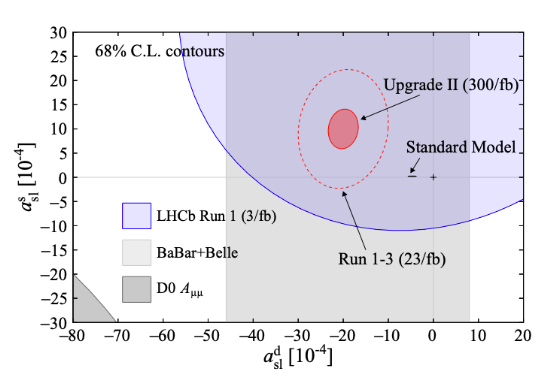 Figure 4: Existing measurements of the semileptonic asymmetries αssl and adsl at LHCb and other experiments, and the precision possible at LHCb using the data to be collected in Run 3, as well as a proposed second upgrade of the experiment (that will enable the collection of at least 300 fb-1 of data). These projections are arbitrarily centred.  [From: LHCB-PUB-2018-009]

The tensions with the Standard Model that have been observed in rare and semileptonic b-decays to date hint at new physics, but the significance of such results is still limited by the available data samples. With the data collected in LHC Run 3, LHCb can make tests of lepton universality in b → sll transitions at the level of 2.5% - an improvement in precision by a factor 2.5 relative to the combined Run 1 and 2 dataset. Similar improvements in precision are also expected in measurements of angular distributions of B → K*μμ decays and the Βs→ μμ branching fraction (see Fig. 5). Uncertainties on measurements of semitauonic decays will improve as well, with an absolute precision of about 1% expected for R(D*). 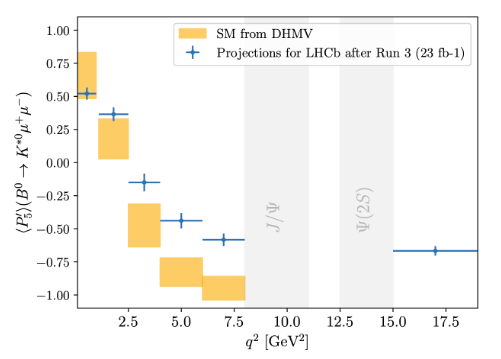 Figure 5: Expected precision achievable in the angular analysis of the B → K*μμ decays, assuming central values do not change from the current analysis. P5’ is one observable that describes the angular distribution of these decays, and is shown here as a function of the square of the dimuon invariant mass. This observable currently shows tensions with Standard Model predictions. [from Eluned Smith]

Measurements of charm physics will also significantly benefit from the LHCb Upgrade. Roughly one in four of the LHC beam collisions at LHCb will contain a charm hadron within the detector acceptance. The first observation of CP-violation in charm meson decays was found at a precision of 0.03%; the precision in similar studies using the full Run 3 dataset will be improved by a factor 3. Studies of additional charm meson decays will enable such matter-antimatter differences to be characterised, and the potential implications of such CP-violation to be understood. Studies of mixing induced CP-violation in neutral charm mesons will also benefit, with the precision here expected to improve by more than a factor 2 compared to measurements with the existing dataset. This will include measurements of ΑΓ with a precision of about 0.004%.

LHCb’s rich programme beyond flavour physics will also benefit in the new upgrade era. Spectroscopy measurements (for example studies of the exotic X(3872) tetraquark candidate) and searches for new bound states will clearly benefit from the increase in data volume. In addition, LHCb’s electroweak programme will advance: LHCb now plans important measurements of the weak mixing angle and the W boson mass. Finally, searches for dark photons will consider modes not previously considered (such as D* → DA')  achieving world’s best sensitivity in previously unexplored regions of the relevant parameter space.

The LHCb detector upgrade will enable significant steps forward across LHCb’s broad physics programme. Many key analyses will see their datasets increase by nearly a factor five by the end of LHC Run 3, with the experiment planning to reach a total recorded luminosity of 50 fb-1 by the end of Run 4. Meanwhile, the experiment has set out longer term plans for a second upgrade to take place at the end of this decade, enabling the collection of at least 300 fb-1 of data; the collaboration expects to submit its framework technical design report for this upgrade this year. Together, these two upgrades will keep LHCb at the forefront of research into flavour physics and more. Key analyses will use unprecedented datasets to achieve significant improvements in precision and reach. The coming years offer much excitement to analysts within the experiment and to the wider particle physics community.